And it is happening everywhere. I see people on the street in Melbourne and Sydney. This is no solution to any problem. It is indifference and cruelty. 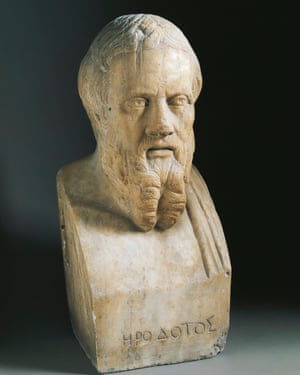 My favourite book of all time is Herodotus’s Histories. The first ever book of history, it tells the story of the war between the Greeks and the Persians in the fifth century BC for the survival of Western Civilisation before it had even commenced its journey. A storyteller who travelled everywhere to gather personal accounts of what others had witnessed, but with so much ancillary information and irrelevant tales about everything under the sun – including about the first people ever to have sailed around Africa which you know was true because they had observed that the sun eventually was no longer to their south but at some stage was found to their north. Lots and lots and lots like that, including some of the most astute philosophical, political and historical reflections you will ever read. Amazing book, but I can imagine not to everyone’s tastes. It’s also a reminder that you should get your reading in early since as you get older, you don’t have the patience you had when you were young.

Ah but this is merely prelude to: Nile shipwreck discovery proves Herodotus right – after 2,469 years.

In the fifth century BC, the Greek historian Herodotus visited Egypt and wrote of unusual river boats on the Nile. Twenty-three lines of his Historia, the ancient world’s first great narrative history, are devoted to the intricate description of the construction of a “baris”.

For centuries, scholars have argued over his account because there was no archaeological evidence that such ships ever existed. Now there is. A “fabulously preserved” wreck in the waters around the sunken port city of Thonis-Heracleion has revealed just how accurate the historian was.

“It wasn’t until we discovered this wreck that we realised Herodotus was right,” said Dr Damian Robinson, director of Oxford University’s centre for maritime archaeology, which is publishing the excavation’s findings. “What Herodotus described was what we were looking at.”

Known as The Father of Lies (as well as the Father of History) because of his many fantastical tales, but appears that this one has turned out to be true. As for the book itself, it tells the story of the preservation of Western Civilisation that might have been snuffed out before it had even begun.

With education the way it is, neither the cartoon nor this story will any longer have meaning and resonance: Venezuela returns to ‘Middle Ages’ during power outages.

“We make lamps that burn gasoline, or oil, or kerosene — any type of fuel,” explained Lizbeth Morin, 30.

“We’ve returned to the Middle Ages.”

They have gasoline, oil and kerosene so hardly mediaeval. It is instead late nineteenth century, time travellers back about 150 years, but that is insane enough since they brought it on themselves. Unenlightened self-delusion in the form of Democratic Socialism – that is, in the form of politically-sanctioned theft. Could happen anywhere.

Any politician who will not say the words, “capitalism and the free market are good – socialism is bad”, should never be elected. If they will not say these words, they are themselves mediaeval, wishing to return us to the days of an aristocracy and their dependent serfs.

To which may be added this: Christchurch Murders: The Real Accomplices.

The reactions that followed were marked by legitimate indignation. Unfortunately, the attack was also used to launch a campaign both dangerous and treacherous.

Tarrant, in his manifesto, defined himself as an “eco-fascist” and wrote that he admires British Nazi Oswald Mosley and China’s communist regime, and that he rejects conservatism. Even though US President Donald J. Trump condemned the murders, the killer’s remarks were used to attack him.

Possibly because Tarrant opposed Muslim immigration to Western countries (mostly, he wrote, because it leads to overpopulation), many of those who expressed concerns about Muslim immigration to the West, or criticized Islamic violence or anti-Semitism, were immediately accused as having been partly or fully responsible for the massacre — even US President Bill Clinton’s daughter, Chelsea Clinton.

By contrast, many Muslims, when extremist violence in the name of Islam takes place, state that they cannot be held “collectively responsible” for the actions of their co-religionists, and that to try to do so is unjust and “Islamophobic.” Often, however, it seems as if members of other religions are not held to the same presumption of innocence.

I finally got to listen to PDT’s whole speech and it was spellbinding. Mark Steyn and Tucker Carlson both watched it and both have had the same reaction. Who else today can give a speech that lasts an hour and a half and leave you sorry it has come to an end?

I will also draw your attention to the last quarter hour, from around one hour and ten minutes in, where the President kind of summarises the themes of the 2020 campaign to come.

It could all have been so different from how it is. Like the market economy, which effortlessly produces the goods, almost making it seem as if there is nothing to it, in the same way you think that things just go right, when they go right, because they always will. For myself, I am too too aware how we are in a moment of reprieve from a deluge, that if it happens, will wipe our civilisation away until there is nothing left.

The above is a ten minute highlights reel. Below is the full hour and a half.

This is a matching political post to the more technical Getting the lights back on in Venezuela. It’s hard to work out the motivations that lie behind the green agenda, whether pure ignorance, malice, envy, stupidity, greed, short-sightedness, or whatever. All are included. The only element left out because none of it is present is enlightened self-interest, of which there can be none at all. And parties of the left are all of a piece. You want the green nude eel in Australia, we have two parties – at a minimum – whose aim is to provide exactly that.

More here on the same thing from Powerline: DEMOCRATS PUNT ON THE GREEN NEW DEAL. The conclusion:

Climate change alarmism is a joke. It exists only for purposes of domestic politics, and as an excuse to feather the nests of “green” entrepreneurs who support the Democratic Party.

Comes with this as one of the comments.

An “end to global warming” has never been the point. The point of all of this is that “saving the planet” is a fantastic rationale for injecting social warrior justice politics into virtually every aspect of both society and private life. It is a doorway to POWER and this lust for power is the only reason for this zeal to “fight climate change.” As others have more eloquently said, if you accept the premise that that human actions damage the planet (cause global warming) then it stands to reason all human actions must be controlled. And, if you are a social justice warrior, you are willing to countenance the lie to achieve power because you are so good, your motives are so pure and are just so much morally and spiritually superior to “Them” that the lie is justified. It represents a view of the universe where “the natural elect” should have the right to do whatever they want.

I wish the news wasn’t almost always so dark with menace. The left never admits fault, never relents and never seem to learn from history. They just stay the course and events just keep moving their way. These are from The Top Twenty Mueller Report Memes where they overlap with Jussie Smollett, whose charges have just been dropped! It’s not just that they are corrupt, but they don’t even try to hide it any more.

But I’ll add this just in case you haven’t seen it already.

First the media and the Democrats react.

And then PDT himself.

With the last one coming from The Top Twenty Mueller Report Memes.