Most people lead such empty lives they are grateful for anything to believe in. Now that politics has replaced religion, particularly on the left, the madder the notion, the more likely it is to be adopted to provide their lives with meaning.

Take global warming. With the limited levels of un-faked evidence that the planet is warming – polar bears, anyone, no rise in sea levels etc – plus the tremendous harm that ridding ourselves of fossil fuels would do to our standard of living, you might think these would make some kind of impression. Why are people so willing to believe that something that will damage their lives in such a devastating way is true?

But for whatever reason, that they are. Biden Said He Would Transition From the Oil Industry. Nearly 3 in 5 Voters Support That Move.

The election remains a cliffhanger. Talking to lefties is a sobering experience. They don’t just believe this stuff, they instantly believe anything the moment it is put onto The LeftAgenda. How stupid do you have to be to believe the Chinese Flu means we should shut down our lives until it has entirely disappeared. You should even be made to compulsorily wear a mask if you are driving alone in your car. That’s what Joe wants to do and said exactly that yesterday.

This is a matching political post to the more technical Getting the lights back on in Venezuela. It’s hard to work out the motivations that lie behind the green agenda, whether pure ignorance, malice, envy, stupidity, greed, short-sightedness, or whatever. All are included. The only element left out because none of it is present is enlightened self-interest, of which there can be none at all. And parties of the left are all of a piece. You want the green nude eel in Australia, we have two parties – at a minimum – whose aim is to provide exactly that.

More here on the same thing from Powerline: DEMOCRATS PUNT ON THE GREEN NEW DEAL. The conclusion:

Climate change alarmism is a joke. It exists only for purposes of domestic politics, and as an excuse to feather the nests of “green” entrepreneurs who support the Democratic Party.

Comes with this as one of the comments.

An “end to global warming” has never been the point. The point of all of this is that “saving the planet” is a fantastic rationale for injecting social warrior justice politics into virtually every aspect of both society and private life. It is a doorway to POWER and this lust for power is the only reason for this zeal to “fight climate change.” As others have more eloquently said, if you accept the premise that that human actions damage the planet (cause global warming) then it stands to reason all human actions must be controlled. And, if you are a social justice warrior, you are willing to countenance the lie to achieve power because you are so good, your motives are so pure and are just so much morally and spiritually superior to “Them” that the lie is justified. It represents a view of the universe where “the natural elect” should have the right to do whatever they want.

The story is from the US and about them but applies to us just as well: 2020 Battle Lines: Capitalism and Growth (R) versus Socialism and Degrowth (D). Here is much of the article but there is more at the link. 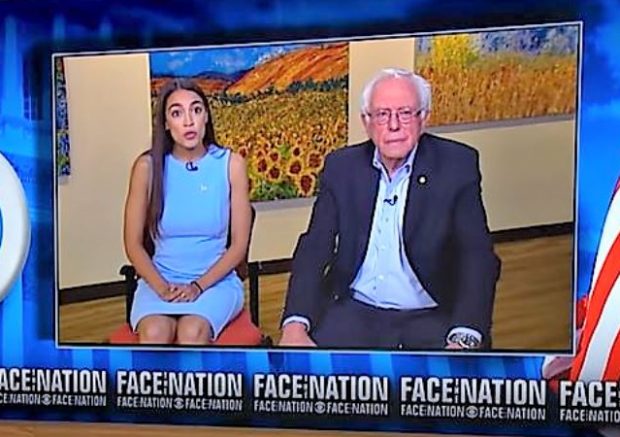 She’s a walking, talking social justice warrior soundbite machine, someone whose knowledge is a mile wide and an inch deep. Social media, where she excels, is perfect for shallow but woke wisdom.

At one level, she is the gift Donald Trump and Republicans could not have hoped for in their wildest dreams. Her wacky Green New Deal is so preposterous in many of its details and in its totality, it is a caricature. It’s a prime example of what I call Progressive or Parody?, where it’s “very hard to distinguish progressive political and social positions from parody.”

That four of the leading Democrat presidential candidates (Harris, Warren, Booker, Gillibrand) rushed to co-sponsor or endorse the Green New Deal will be a theme Republicans will drive home from today through Election Day 2020. That these four kneecapped themselves as General Election candidates is Ocasio-Cortez’s greatest accomplishment (for Republicans) so far.

At another level, though, Ocasio-Cortez should be taken seriously precisely because she is a character familiar to anyone who has spent time on campuses in the past two decades. She represents an ignorant ahistorical adoration for socialism that has captured a significant portion of the Democratic Party. Socialists like Ocasio-Cortez are the energy in the Democratic Party, which explains why presidential candidates immediately jumped on her bandwagon.

At another level, it’s not just Capitalism versus Socialism. In listening to a 2015 audio of Mark Levin, I heard a term I had not heard before: Degrowth.

What is Degrowth? An academic association devoted to Degrowth describes it as follows:

Sustainable degrowth is a downscaling of production and consumption that increases human well-being and enhances ecological conditions and equity on the planet. It calls for a future where societies live within their ecological means, with open, localized economies and resources more equally distributed through new forms of democratic institutions. Such societies will no longer have to “grow or die.” Material accumulation will no longer hold a prime position in the population’s cultural imaginary. The primacy of efficiency will be substituted by a focus on sufficiency, and innovation will no longer focus on technology for technology’s sake but will concentrate on new social and technical arrangements that will enable us to live convivially and frugally. Degrowth does not only challenge the centrality of GDP as an overarching policy objective but proposes a framework for transformation to a lower and sustainable level of production and consumption, a shrinking of the economic system to leave more space for human cooperation and ecosystems.

Watch this video promoting degrowth, and it sounds a lot like the Green New Deal.

And in Oz, these people have already blown up power stations and are dead set on a socialist-green agenda. There’s a lot of stupidity around. I just hope there isn’t that much, but we shall see soon enough.