The Australian left are as stupid as the American left and just as vicious and malicious. This may be the most disgusting story I may have ever come across in Australia in many years: Old Parliament House’s front door set on fire a second time as protests in Canberra continue. Not even for the first time, but the second time. And if it is the second time, this was no accident but deliberate. What a repulsive lot these people are. I found this particularly striking.

Commander Linda Champion from the Australian Federal Police said the fire likely began during a smoking ceremony performed by protesters, which police were aware of and had approved to occur.

“There was a small smoking ceremony and that is something that we had agreed with a lot of the members who were attending each day as part of a peaceful protest,” she said.

“It then became a little bit out of hand and then when ACT police went to respond, that’s when it was greatly exacerbated.”

A smoking ceremony! In North America I can sort of see the point, since that is where tobacco comes from, peace pipes and all. But here? Such an unimaginative lot who have no ideas other than to destroy, with no concept whatsoever what it takes to build or to cherish one’s heritage and history, never mind the source of our freedoms and prosperity.

Let me bring this added detail up from the comments with much gratitude to Cliff Boof. I knew none of this which will teach once again never to depend on the media to keep me aware of what’s going on.

“The Australian” reports that no arrests have been made.

On 10 August 2021 activists representing Extinction Rebellion committed acts of vandalism in Canberra. On 24 August, four of the activists had all charges “proven but dismissed” by Magistrate James Stewart. Magistrate Stewart remarked to one of the activists, Eric “Sergeio” Herbert, “Your actions arose out of peaceful demonstration to further local, commonwealth and world attention to climate change and the inevitable effects it will have on the world community”. Canberra ‘Duty of Care’ rebels have court cases dismissed or given $20 fines – Extinction Rebellion Australia (ausrebellion.earth)
The above link includes the following statement attributed to Herbert: “Today in the ACT court of law it has been reaffirmed that property damage and public disruption in this rebellion are required to enforce the law and protect the occupants of this land. This outcome has provided me with the unimpeachable understanding that the ACT Judiciary are willing to stand behind us as we enact our lawful indispensable duty to bring down this government through. That is our Duty of Care.”

So it will be interesting to see, if arrests are eventually made, how the ACT judiciary will react.

P.S. This bloke Herbert tried a similar trick in Newcastle a month later and was arrested but unfortunately for him Mark Latham’s missus was the Magistrate.

Rodgers was back on the field a week later playing football.

That is from Packers QB Aaron Rodgers on Ivermectin: Many Teams Behind the Scenes Are Treating Players with Same Treatment That I Got. The Packers are the Green Bay Packers which is an American professional football team and Aaron Rogers is their star quarterback. That is, he is a multi-million dollar asset, whose availability to play on any given Sunday will have a major influence on the success of the team.

And to keep him playing, they gave him Ivermectin, which is a treatment that is apparently used throughout the National Football League.

"If science can't be questioned it's not science anymore it's propaganda & that's the truth" ~@AaronRodgers12#PatMcAfeeShowLIVE pic.twitter.com/8PHGdTgYmc

Meanwhile football stadiums are filled week after week with maskless fans who have zero fear they will contract any of the Covid variants while sitting with thousands of others watching the game.

Came across this today, Economic Growth, an article published by the Reserve Bank of Australia. The RBA was doing no more than trying to explain how statistical agencies around the world measure economic growth which is published as a figure as Gross Domestic Product – GDP. The increase in the size of this figure between periods is supposed to be the measure of how much an economy has grown during that time. It is one more artefact that has come down to us from the disastrous introduction of Keynesian economic theory.

The level of economic ignorance as a result of Keynesian theory is fantastic with this a particularly stunning example. I have discussed this in both of my more recent books, my Free Market Economics (2017 – 3rd edition) and then again in my Classical Economic Theory and the Modern Economy (2020. Y “is identically equal to” C + I + G + (X – M) [ written  Y ≡ C + I + G + (X – M) ] which is the basis for calculating GDP in the national accounts. It is an identity, which means that Y is defined by C + I + G + (X – M).

This is in contrast with Y = C + I + G + (X – M) – notice the equal sign – which is the fundamental equation of Keynesian economics. This tells you that if any of the elements on the right side of the equation rise, then the level of Y will also rise, which has led to the idiocy of arguing that raising the level of Public Spending will raise the level of economic output. As the equation shows, higher G must as a matter of arithmetic lead to a higher level of Y.

This is utterly imbecilic and ought to be seen as deeply shameful to the economics profession. But such is as it is.

To see this discussed in my Free Market Economics, see Chapter 9 on “Measuring the Economy” and in my Classical Economic Theory, see pages 181-182 on “The Relationship between Keynesian Theory and the Measurement of GDP”.

Virtually no one, alas, gets it. I often used to point out to my classes, who also did not get it, that there is no comprehensible meaning for the growth in GDP between say 1895 and 1920, during which time our economies were electrified, the automobile was introduced, the cinema was invented, we introduced radio, we began to travel using aeroplanes, we mechanised agriculture and so much more besides.

And, of course, at the heart of the flaws in GDP is the role of government spending which seldom if ever actually constitutes an increase in the real level of output per individual. The construction of wind farms are just one more example of government unproductive spending that appears like growth in the way we calculate output, only in this case it is worse since we don’t even allow for the coal-fired power plants we have knocked over at the same time.

This is ignorance on stilts and the RBA once again emphasises how little they understand. That I hear how our GDP has supposedly risen over the most recent period even as so many of our businesses have been driven out of business and we are restricted all over the place in what we can buy or the places we can travel to, reminds me again how primitive economic thinking really is. We actually understand less today than John Stuart Mill did about the economy in 1848.

Although it is just one moment out of millions of incidents similar to it across the world, it nevertheless seems to capture so many cross currents of our addled culture of the moment. There is now also these additional details from this: ‘SIT DOWN, KAREN’ Baywatch star & ex-Playboy model Patricia Cornwall ‘hit 80-year-old Delta passenger in argument over masks on flight’.

The argument reportedly began as the actress tried to reach her seat after going to the bathroom.

Her path was apparently being blocked by a flight attendant who was serving tea and coffee to passengers.

RSM told police that Cornwall allegedly asked the stewardess: “What am I, Rosa Parks?”

The pair became involved in a heated confrontation after the man apparently told the actress that they weren’t on a bus in Alabama.

Cornwall was detained when the plane landed at Hartsfield-Jackson airport in Atlanta.

Entitled, ignorant but amazingly pretty, the probability of this going any further towards prosecution is near zero.

As for knowing who Rosa Parks is, you would have to be something like in your 70s or 80s to remember and be offended by someone crying martyr by being asked to find a vacant seat on a plane, which I am amazed even exist at the present time.

By the way, do you know who Rosa Parks is?

Rosa Louise McCauley Parks was an African-American activist in the civil rights movement best known for her pivotal role in the Montgomery bus boycott. The United States Congress has honored her as “the first lady of civil rights” and “the mother of the freedom movement”

The woman on the plane, however, thinks she is being oppressed by having to find a seat on a plane. Is there anyone, anywhere defending what she said or did?

If you think things are bad now, go through this: What It Was Like To Live In A Medieval Castle. This is part of the story and hardly even the worst.

Plague And Disease Was Rampant

Considering that the people living in the medieval era weren’t knowledgeable about how a lack of hygiene greatly affected one’s health, plagues and epidemics were common and devastating. Living in constant filth, poor food preparation and storage, among countless other things gave way to constant sicknesses. 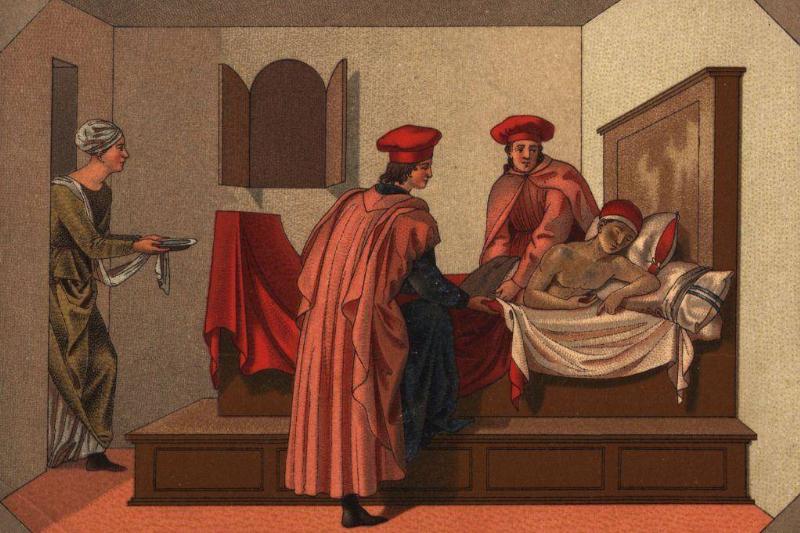 One of the most devastating, however, was the Black Death, which was rampant between 1347 and 1351, killing a vast amount of the medieval European population. Of course, this was just one of the many illnesses that swept across Europe due to poor hygiene, false medical practices, and deplorable living standards.

This has gone round the world a hundred times already but just in case you missed it. An astonishing confrontation between a crazed [maskless] woman and some male trying to get through a flight while drinking. It is women [and men] like her that are keeping us from returning to normal life, where we all just go on about our business.

The story is told more comprehensively here. She was also arrested when the plane finally landed, discussed here.

And for what it’s worth, which is next to nothing to people like these, 150 studies show masks ineffective, harmful.

THE STORY CONTINUES: EXCLUSIVE: Raiders cheerleader turned high-flying realtor is revealed to be the ‘Delta Karen’ – arrested for vicious assault on 80-year-old passenger who took his mask off to eat (and she wasn’t wearing a mask either!). Naturally not covered by the American media but in the Daily Mail in the UK.

What I had not known was the age of the mail passenger. That, too, is revealed.

A high-flying realtor who worked for Coldwell Banker and Berkshire Hathaway in California has been revealed as the ‘Delta Karen’ who was arrested by the FBI for attacking an 80-year-old passenger on a plane after he removed his face mask to eat – while she was herself maskless.

Such an astonishing story is so many ways. It really is time to give up on masking the population. What is more astonishing to me is how everyone in America seems free to travel about, with or without masking up.

Of all things,my granddaughter age 5 came home from her new school and asked who the Three Wise Men were. It gave me hope for the world to know these things can still be part of a modern education. This was my answer which has now, because of that, become my favourite carol. It is also sung by the Choir of Kings College Cambridge where I and the family spent the Christmas of 1991 and heard the Christmas service, along with Handel’s Messiah.

My sincerest and warmest Christmas wishes.

Let me also include this as well which we have also been to.