And so what if it is, what then? It’s not as if we are locked up with a psychopathic moonbat moronic low-IQ fool in command. And if 61% are happy with the Premier whose policies have directly led to the deaths of over 700 people, be grateful, you are living in the essence of a democratic society. Majority rule, right? At least he is making the trains run on time even if no one has anywhere to go more than 5km from their homes.

It would be much funnier if it weren’t actually true.

AND THIS FROM TODAY’S FINANCIAL REVIEW: Mask crackdown mad, health experts warn. Their headline, with this text:

Asked why he would require Victorians to wear masks when there is no health purpose, Mr Andrews dismissed the question. “That’s an esoteric debate, isn’t it? Maybe there will be a time when we have the luxury of having those sorts of debates.”

Maybe there will be a time! “Mad” is just the word.

I cannot tell if this is just hyperbolic exaggeration or is meant literally. To me, it could be either, but what if it’s literally true? I keep coming back to The Caine Mutiny and Captain Queeg. The Caine is a US battleship during the war in the Pacific. Captain Queeg is its captain who has gone insane. The leader of the mutiny is Maryk.

Maryk keeps a secret log of Queeg’s eccentric behavior…. Soon afterward, the Caine is caught in a typhoon, an ordeal that sinks three destroyers. At the height of the storm, Queeg’s paralysis of action convinces Maryk that he must relieve the captain of command to prevent the loss of the ship. Willie, as Officer of the Deck, supports the decision. Maryk turns Caine into the wind and rides out the storm.

Let me take you back to my post of August 6:

The Covid pandemic has brought on our modern version of The Stockholm Syndrome: “feelings of trust or affection felt in many cases of kidnapping or hostage-taking by a victim towards a captor.” We now have the Melbourne Syndrome, which I come across versions of every day:

Since Melbourne has now implemented the hardest lockdown at the hands of the dumbest and most incompetent political leader in the world, I believe that Melbourne should have the honour of bearing the name of this widely observed form of insanity.

And what do we find in the papers today: Victoria backs Dan Andrews in Newspoll.

A majority of Victorians have backed Daniel Andrews’ management of the second COVID-19 outbreak, with two-thirds of voters across the country also rating the state’s lockdown as “about right”.

Lots of reasons for this gross stupidity, but a deep insight into the actual risks of the coronavirus is non-existent. I meet up with these people all the time, who will quote oceans of stats on Sweden and Florida to prove that we are doing well here in Victoria and it’s all thanks to Dan. I suppose democracy works after a fashion, but these totalitarians have worked out ways to deceive half the population plus one in one election after another.

And not necessarily the stupider ones since there are plenty of college professors who vote for parties of the left and will on no account ever do anything else.

Meanwhile, the State goes further into bankruptcy. If ever there were a project that will never cover its costs, this is the one, with this the latest news: West Gate Tunnel’s toxic soil removal to cost Victorian taxpayers up to $750m.

Taxpayers are set to fork out hundreds of millions of dollars to help get rid of West Gate Tunnel’s toxic soil.The state government will stump up the extra cash to move and store contaminated soil that has stalled the $6.7 billion project for almost a year.

Why people vote for parties of the left is beyond me. Do they really believe they will become better off with such massive waste as the hallmark of government.

Honestly how off the planet do you have to be to believe we are in danger of global warming along with this pandemic? Yet there these people are, as filled with fear and ignorance as it is possible to be, ready to follow the single most incompetent political leader we have ever had into both poverty and a police state.

This is in Ballarat, a provincial city just outside Melbourne in the state of Victoria in the midst of Australia. We are unbelievably dealing with our own version of the Stasi who like all such arms of the law, are only following orders. Frightening and disgusting. This is full on totalitarian, never mind an extreme violation of free speech. I still don’t know what she has been charged with doing or what was actually illegal for her to have done.

Update: She was arrested for putting up a Facebook post for an anti-Lockdown protest. She didn’t even attend since the protest was not even to occur until the following Saturday. She only mentioned it on a note to her Facebook friends. 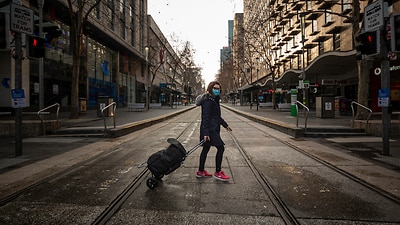 The Covid pandemic has brought on our modern version of The Stockholm Syndrome which you will recall are: “feelings of trust or affection felt in many cases of kidnapping or hostage-taking by a victim towards a captor.” We now have the Melbourne Syndrome, which I come across versions of every day:

Now why should it be the “Melbourne” syndrome? There are plenty of place similar where you find similar attitudes. In my view, I believe it should be called the “Melbourne” Syndrome because Melbourne has now implemented the hardest lockdown at the hands of one of the most far-left and incompetent political leaders in the world, a leader who nevertheless retains high approval ratings, within a state in which the corona virus issue went from benign to statistically explosive (although the death rate is still near invisible at something like 0.002% per head of population). I  therefore believe Melbourne should have the “honour” of bearing the name of this widely observed form of political insanity. Others are welcome to suggest alternative places and names.

And not only do we have the hardest lockdown possibly anywhere in the world, we also have the most incompetent leadership since unlike virtually everywhere else, following the initial peak, things in Melbourne managed to get far worse whereas the norm everywhere else, including the rest of Australia, was for conditions to have improved. And let me provide a reminder of what we are being asked to endure. These were “the Stage 4 Lockdowns” that were put in place by the Victorian Government at the the start of August when out of nowhere there was a large statistical increase in the number of cases although trivially small relative to the size of the population. Melbourne by the way is the capital city of the state of Victoria.

Are people upset by these restrictions? The figures below are for Australia as a whole. Will get to Victoria in a moment. 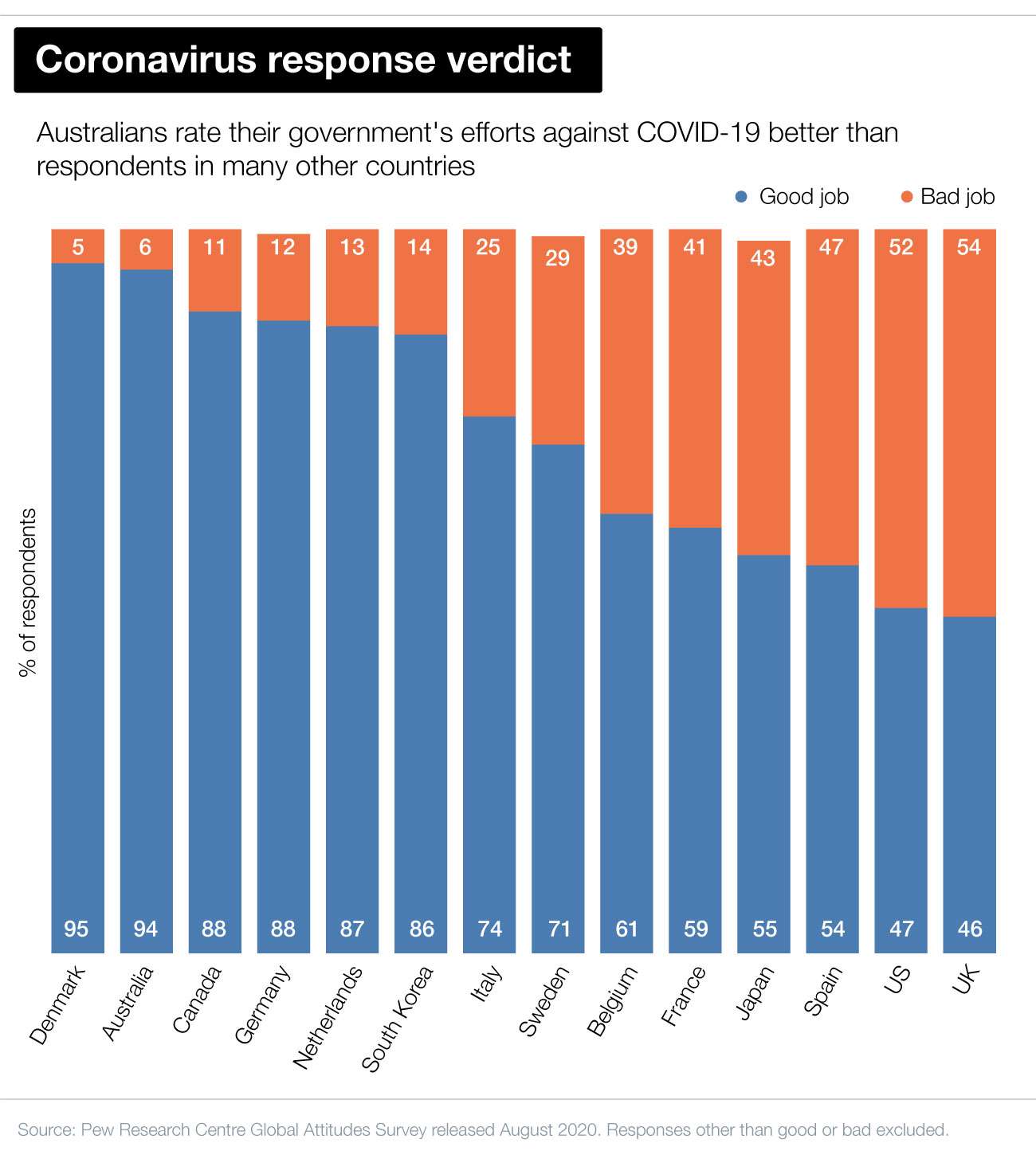 As for the nature of the statistical collections, this is the Chief Medical Officer of Victoria specifically stating that to be classified as a Covid death only requires that the virus was present, not that it had been the actual cause of the fatality.

With this kind of approach, you could turn any common sickness into a statistical killer. Think of this as well, which is the first of the comments on the video.

I am a provider. One of my patients admitted herself into hospice d/t kidney failure and tested negative for “COVID.” When she died, they put on the death certificate death d/t “COVID.” We are in the early stages of a democide. THIS is what it feels like to have the governments force you to live in and breathe NONSENSE. War is peace, Freedom is Slavery, Ignorance is Strength and 2+5=5.

And are the numbers in Victoria exaggerated. Here are some stats for Victoria versus the rest of Australia that were published the other day. Victoria has around a quarter of the country’s population.

So this is where we are:

[The Premier] said restrictions would be in place until next year if Victorians didn’t adhere to them and case numbers didn’t decrease.

“We will be into 2021 with significant lockdown in place.”

And do people resent this fantastic intrusion on their lives? Do they feel the heel of the state and wish to see it lifted? Here are the results of a poll of Victorians over whether they support the measures that have been taken:

The lockdown might be draconian, but Victorians overwhelmingly support the public health restrictions imposed to curb the second wave of coronavirus infections….

New research shows 72% of the sample backs the decision of the Victorian government to impose a curfew between 8pm and 5am, 71% supports curbs on leaving the house, while 70% endorse restrictions on business and the requirement that people travel no further than 5km from their house.

It’s the Melbourne Syndrome all right, unless someone can come up with an example even more absurd yet with the kind of wide support as we find in Melbourne, which used to be and was for many years the World’s Most Liveable City. Well we do still have very nice parks and restaurants, if only we were allowed to visit them, or our children, or our friends, or sit in a cafe, or go to the movies, or just to walk along the street or the beach more than a couple of miles from our home.

Really, is there anywhere else to compare with this? It is one of many such emails that have been sent to me from friends and family around the world who have found Melbourne mentioned in the local news. Melbourne does however stand well out from the pack.

You can therefore still see traces here in Australia’s origins as a penal colony.

UPDATE: More information from The Australian:

Victoria Police have arrested a young woman not wearing a mask who refused to reveal her name and address.

Video emerged on Monday of an altercation between the woman, 21, refusing to wear a mask and a Victoria Police protective service officer on Wellington Street in Collingwood at about 5pm on Monday.

A Victoria Police spokeswoman said the woman was not fined because she has a condition exempting her from wearing a face covering, which she did not say to the PSO.

The Covid pandemic has brought on our modern version of The Stockholm Syndrome: “feelings of trust or affection felt in many cases of kidnapping or hostage-taking by a victim towards a captor.” We now have the Melbourne Syndrome, which I come across versions of every day:

Since Melbourne has now implemented the hardest lockdown at the hands of the dumbest and most incompetent political leader in the world, I believe that Melbourne should have the honour of bearing the name of this widely observed form of insanity.

And just for contrast, let me note what is simultaneously going on in Stockholm: Destroying Western Media’s “Swedish Public Health Disaster” Narrative In Two Simple Charts

Go to the link and have a closer look. [THE LINK HAS BEEN FIXED.]

Only when it’s all over and years from now will we reach some kind of consensus on what ought to have been the right approach. As for the worst approach, we here in Melbourne have been able to observe it for ourselves. But the thanks Daniel Andrews and the rest of them are getting for this disgusting botch needs to be memorialised even as so many amongst us bless him for his efforts.