The incomparable Henry Ergas on Jews hear echoes of another time. Here is most of what he wrote.

According to Ephraim Mirvis, the Orthodox Chief Rabbi of Great Britain and Northern Ireland, “the overwhelming majority of British Jews” are “gripped by anxiety” at the possibility of a Labour victory….

As Mirvis put it: “A new poison — sanctioned from the top — has taken root in (Britain’s) Labour Party.” Declaring Labour’s claim it is doing everything it can to stamp out the anti-Semitism a “mendacious fiction”, Mirvis concluded that in next month’s election, “the very soul of our nation is at stake”.

That Corbyn’s response would only have deepened the Chief Rabbi’s concerns should be obvious. Interviewed on Wednesday by the BBC’s Andrew Neil, Corbyn was asked four times whether he would like to apologise for the widely reported flaws in the party’s handling of anti-Semitism.

Each time, he refused. Meanwhile, his closest allies hurled a torrent of abuse at Mirvis, accusing him of everything from bigotry to homophobia.

That the Chief Rabbi should be compelled to make such an unprecedented statement at this time ought to alert us to the deep sense of insecurity and fear felt by many British Jews: pic.twitter.com/DNxr0Qxht5

Unfortunately, Britain’s Labour Party is not alone. As Peter Kurti demonstrates in a paper released earlier this month by the Centre for Independent Studies, anti-Semitic attitudes, which were once the exception, are rapidly becoming the norm in the “progressive” left worldwide.

To some extent that reflects the realities of political compet­ition. According to a Pew Research Centre survey, more than 90 per cent of Muslims in Muslim-majority countries have an unfavourable view of Jews, with large numbers believing they are to blame for worsening relations between Muslims and the West.

As migrants from those countries constitute a rapidly growing share of left-leaning electorates in the advanced democracies, their prejudices have contaminated the outlook of politicians scrambling for Muslim votes.

But the Muslim share of Western electorates is scarcely large enough to account for much of the rise in anti-Semitism on the left.

If there's anyone who has any doubts about Jeremy Corbyn's anti-Semitism, this interview will clear things up. His equivocation, lack of accountability and reluctance even to acknowledge anti-Jewish bias is stunning: https://t.co/kQgbgCiNBV

Nor can it be explained by envy, hardship or insecurity, all of which underpinned the working-class anti-Semitism of the 1930s.

On the contrary, studies suggest the new anti-Semites are young, well-educated and reasonably well-off.

They are, of course, a heterogeneous group. However, what they have in common is the demonisation of Israel….

But alongside that anti-Semitism of the Third Worldists, there is, particularly in Europe, also a growing anti-Semitism of the comfortable elites. As French sociologist Danny Trom has found, what they loath is not Israel’s modernity but its commitment to values they would rather bury….

In an age of appeasement [Israel] rejects fashionable pieties, instead returning blow with blow. At a time when the “nowhere” are triumphant and the nation is denigrated as a straitjacket, it harbours a fierce patriotism. And in a world of disposable selfhood, where you are whoever you want to be, it remains stubbornly attached to an identity gained by birth and forged by faith.

It is, for all those reasons, the perfect object for the hatred of Third Worldists and cosmopolitans alike. Add to that mix the bacilli, which were never quite extinguished, of the old anti-Semit­ic tropes — conspiracy theory, national betrayal, secret global power — and the result is a brew as potent as it is toxic.

None of that implies a Corbyn government would unleash a new holocaust, though one should never forget Hannah Arendt’s grim admonition that “it is in the very nature of things human that once a specific crime has appeared for the first time, its reappearance is more likely than its initial emergence could ever have been”.

And then there is this from the city in which I was born: Hatred towards Jews on Full Display at York University.

Mayor Tory took to Twitter to say: “I am very disturbed by the apparent polarization and violence evident from the events of last night at York University. I have heard concerns from several Jewish groups in our city today. Anti-Semitism and violence is totally unacceptable.”

Both John Tory and Justin Trudeau’s condemnation of anti-Semitism sounded suspect to me, in that it was an example of politically correct parroting using language that carries no weight.

Trudeau was being something of a chameleon with his actions.

Yes, the PM denounced anti-Semitism at York. But he also joined hands with such luminaries of democracy and human rights as North Korea, Egypt, Nicaragua, Zimbabwe and the “State of Palestine” to betray its ally Israel and for the first time ever vote in favour of a United Nations resolution that condemns the country.

These votes are an annual ritual at the UN, where the Jewish state is targeted by the Islamic Bloc of over 50 countries, along with the Third World dictators they get to back them.

As for Mayor John Tory, he denounced anti-Semitism on one hand, but has no problem with opening up Toronto City Hall to Islamic call for prayers, the kind of which have previously referenced Jews as people who have earned the wrath of God — something I have documented in previous columns.

Even Toronto Police chaplain Musleh Khan is on record discussing supposed quotes from the prophet that Jews have earned the wrath of Allah. 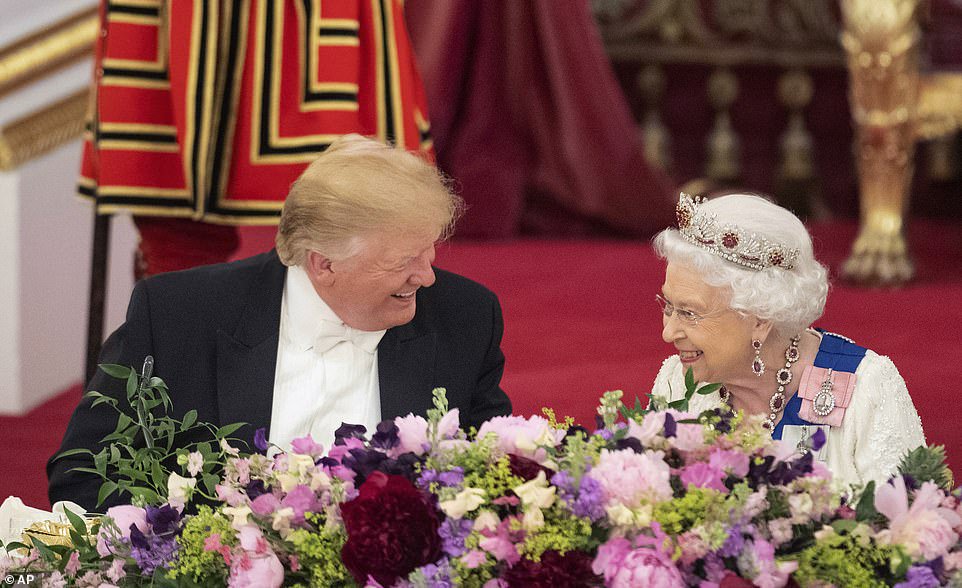 From The Oz: Brexit is diverting attention from Jeremy Corbyn’s red flag radicalism. And do not for a second think this might not happen here.

If next year Jeremy Corbyn becomes prime minister of Britain, this political figure, hitherto dwelling in the margins of politics, becomes a world historical figure.

Historic figure? After being in politics for 35 years and serving on the frontbench only when he became leader? But how else to view it? Corbyn is proposing the reversal of Thatcherism, the 1980s program of privatisation and union-busting implemented under the Iron Lady’s leadership, and thought by all to be irreversible.

One columnist has branded Corbyn’s program an “unapologetic onslaught on the crumbling neoliberal order”. He should have added, “And not just in Britain.” If Corbyn wins and starts peeling Thatcherism from the statutes, he will provide an irresistible model for other European centre-left parties being devoured by right-wing nationalists.

Given this, it’s surprising the reaction to his speech to the British Labour Party conference on September 26 was so muted. Here he was proposing the renationalisation of water, rail and the Royal Mail; a tax on second homes to fund expansion of public housing; board-level representation of employees; and pulling 65 per cent of workers under 25 on to a guaranteed minimum wage. Most radically, his government would appro­priate 10 per cent of every company’s shareholdings on behalf of employees and the state. Plus grant free childcare.

In 1983, the last time the Left controlled British Labour, MP Gerald Kaufman branded its explicitly socialist manifesto “the longest suicide note in history”. It helped Margaret Thatcher consign Labour to 27.6 per cent of the vote in her 1983 landslide.

Right now, however, the red flag radicalism is escaping attention because the debate over Brexit is sucking the air out of British politics. But there is another factor: a striking shift in opinion. Fear of nationalisation and chaotic economic management were, until Tony Blair, well-tested rallying cries against Labour. No more. Expanding the state is popular. Two-thirds of the electorate wants railways back in public ownership. Only 17 per cent of the electorate think capitalism is working for them. Voters born after Thatcher are Corbyn’s strongest supporters.

From The Mail Online:

EXCLUSIVE: Jeremy Corbyn said British ‘Zionists’ have ‘no sense of English irony despite having lived here all their lives’ and ‘need a lesson’, while giving speech alongside Islamic extremists at a conference publicised by Hamas’ military wing

And then from Drudge:

The first Muslim MP in the NSW parliament has sparked a row overnight, refusing entry to a respected Jewish leader to a Labor Party multicultural launch.

Upper House MP Shaoquett Moselmane refused entry to Jewish Board of Deputies CEO Vic Alhadeff at the launch of the Labor Union Multicultural Action Committee launch last night saying, according to Mr Alhadeff, that he was not a Labor Party member.

Then this from the United States: Palestinian Congressional Candidate ASSAULTS Jewish Journalist at Political Event.

A journalist was assaulted by a soon-to-be congresswoman while asking her questions at a political rally for U.S. Congressional candidate Ilhan Omar in Minnesota on Saturday.

Rashida Tlaib, a Palestinian Muslim who won her primary in Michigan’s 13th Congressional District on Tuesday, forcefully grabbed Jewish journalist Laura Loomer and stole her phone when Loomer approached her to ask questions at the rally.

And then from the UK: British Labour Leader Jeremy Corbyn Admits, After Months of Lies, That He Was In Fact “Present” At Ceremony Honoring the Terrorists Who Slaughtered Israeli Athletes at the 1972 Olympics.

Here is @yaelberda ‘s hero, leader of the British Labour Party, Jeremy Corbyn, laying a wreath at the grave of one of the terrorist murderers of the Israeli Olympic Team in Munich in 1972. Yael, You are Disgusting!! pic.twitter.com/piGqLhYTFG