Is this Iran working with the American Deep State?

Iran killed an American contractor, wounding many. We strongly responded, and always will. Now Iran is orchestrating an attack on the U.S. Embassy in Iraq. They will be held fully responsible. In addition, we expect Iraq to use its forces to protect the Embassy, and so notified!

UPDATE: It’s now six hours later. This is from Instapundit.

The Iranians won’t like the way this plays out.

Meanwhile, Democrats are already attacking Trump. Adriana Cohen writes, so much for the water’s edge. Silly Adriana. That’s only for Democratic presidents.

Meanwhile, blue-check lefties have rushed out to call this Trump’s Benghazi. But unlike Hillary, Trump didn’t leave the staff to die, he sent help.

Or as Trump notes: 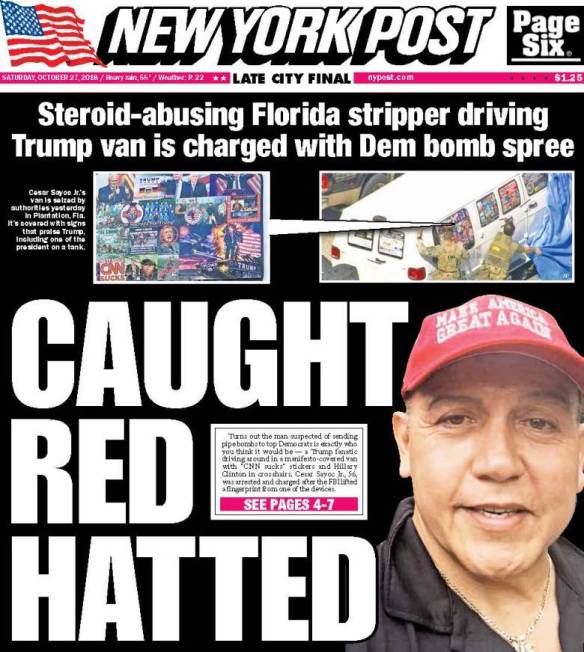 That headline is the entire point, and found at Drudge as well. The message: violence on the right is just as bad – worse – than violence on the left. The bomber is actually just a lone nutter, everyone’s favourite version even on the right. Such people are bound to show up in a free society from time to time but have nothing to do with the values of the people on our side.

Very comforting, I suppose, in its own way. But that is not how I see this at all. In my view, he was almost certainly the frontman in a very elaborate and cleverly constructed anti-Trump deep state operation. But the question I was asked was whether the bomber would really be willing to spend the next twenty years in some maximum security prison. And while there are many who would, I am not sure the way this is shaping up now that the smoke is beginning to clear.

This is how the bomber gets off with a ridiculously light sentence: Report: Bodybuilder Cesar Sayoc Admits the “Pipe Bombs” Wouldn’t Hurt Anyone – And He Didn’t Want to Hurt Anyone. In fact, that is so obviously true, that the defence almost writes itself. As Steve Hayward at Powerline observed:

The bombs-that-weren’t-bombs (apparently—reports still conflict about this) were so obviously amateurish that it is hard to rule out the possibility that it is the product of a prankster who just wanted to see how crazy he could make everybody.

That was exactly the point. Everything about the operation made it look like amateur hour and unserious. A harmless kook. Slap-on-the-wrist territory so far as personal punishment goes, but with the media in the meantime going full bore about violence from the right, sentiment is shifted by the busload. You may be sure that this will nevertheless be an event we are reminded about years into the future, along the lines of Columbine. The phrase I now hear all the time is that this was the MAGA bomber. It is now part of the left’s arsenal of lies.

Clever beyond imagination. A deep state enterprise all round since the only value of the story is to stop Republican momentum as much as possible before November 6. By the time we end up with a trial of the bomber, even if he goes away for a couple of years, since he wasn’t really trying to hurt anyone, the election will be long past and he will get his reward.

Suspicion about who was actually behind the planting of the bomb among Trump and his associates must be at least as high as mine, but down this particular path they cannot go, not even to suggest any investigation might be of some interest. This is what the President said, but he can say nothing else.

Call for unity with those who are immune to any attempt to be reconciled with the President will work on his own side of the fence but cut zero ice on the left. Meanwhile, equivalence between violence on the left and right has now become established.

And then there was this: CESAR SAYOC: ‘MAGA BOMBER’ FACEBOOK BETRAYS DEMOCRAT TRUMP INFILTRATOR, ANTI-GOP POSTS. I hate the “MAGA Bomber” reference, but that aside:

Elsewhere on the internet, just seconds after Cesar Altieri Sayoc’s apprehension, his public listing identified him as a Democrat.  (Below) Moments later, the listing was updated by someone, changing his listing from Democrat, to “Republican.” While it’s been noted that MyLife is a publicly edited page, I captured his Democrat party affiliation within seconds of the announcement of his apprehension and then watched in amazement as his party affiliation changed from Democrat to Republican before my very eyes, capturing screenshots as quickly as I could to document the changes.  (Photos)

You know why it was done. The real question was who.

On the one hand:

But then on the other:

From January 12, 2017, that is, from even before the inauguration, even then titled, The Deep State.

If you are not spooked by all of this then you are made of tougher stuff than I am.

The last of these comes with the actual title, “The Deep State Goes to War with President-Elect, Using Unverified Claims, as Democrats Cheer”. Here is the opening text, but I have to say this is terrifying and in no sense politics as usual, unless this really is politics as usual, although we have never before seen it revealed so openly.

IN JANUARY, 1961, Dwight Eisenhower delivered his farewell address after serving two terms as U.S. president; the five-star general chose to warn Americans of this specific threat to democracy: “In the councils of government, we must guard against the acquisition of unwarranted influence, whether sought or unsought, by the military-industrial complex. The potential for the disastrous rise of misplaced power exists and will persist.” That warning was issued prior to the decadelong escalation of the Vietnam War, three more decades of Cold War mania, and the post-9/11 era, all of which radically expanded that unelected faction’s power even further.

This is the faction that is now engaged in open warfare against the duly elected and already widely disliked president-elect, Donald Trump. They are using classic Cold War dirty tactics and the defining ingredients of what has until recently been denounced as “Fake News.”

Their most valuable instrument is the U.S. media, much of which reflexively reveres, serves, believes, and sides with hidden intelligence officials. And Democrats, still reeling from their unexpected and traumatic election loss as well as a systemic collapse of their party, seemingly divorced further and further from reason with each passing day, are willing — eager — to embrace any claim, cheer any tactic, align with any villain, regardless of how unsupported, tawdry and damaging those behaviors might be.

The serious dangers posed by a Trump presidency are numerous and manifest. There are a wide array of legitimate and effective tactics for combatting those threats: from bipartisan congressional coalitions and constitutional legal challenges to citizen uprisings and sustained and aggressive civil disobedience. All of those strategies have periodically proven themselves effective in times of political crisis or authoritarian overreach.

But cheering for the CIA and its shadowy allies to unilaterally subvert the U.S. election and impose its own policy dictates on the elected president is both warped and self-destructive. Empowering the very entities that have produced the most shameful atrocities and systemic deceit over the last six decades is desperation of the worst kind. Demanding that evidence-free, anonymous assertions be instantly venerated as Truth — despite emanating from the very precincts designed to propagandize and lie — is an assault on journalism, democracy, and basic human rationality. And casually branding domestic adversaries who refuse to go along as traitors and disloyal foreign operatives is morally bankrupt and certain to backfire on those doing it.

“Morally bankrupt” it most certainly is and then some. “Certain to backfire on those doing it” is very optimistic. If this is how things are, Nazi is not going too far in describing what is going on. If the evidence were not before our eyes of the way in which the media and the CIA have worked with the Democrats to undermine Trump’s authority you would think all of this is impossible.