Which is why so many seek political power even if it the means to taking power leads to the death of Western Civilisation. They won’t have to live through the consequences of what they do so what do they care? The rest of this post was sent to me by a colleague.

I awoke this morning still puzzled about our apparent ‘social justice leaders’ who cannot bring themselves to say ‘Christian’. Last night I read this:
Easter Worshippers or Christians? Obama, Clinton and Other Democrats Accused of Bias.

Basically, when Muslims get killed they are called Muslim, but when we Christians are killed we are called ‘worshippers’. Hillary: 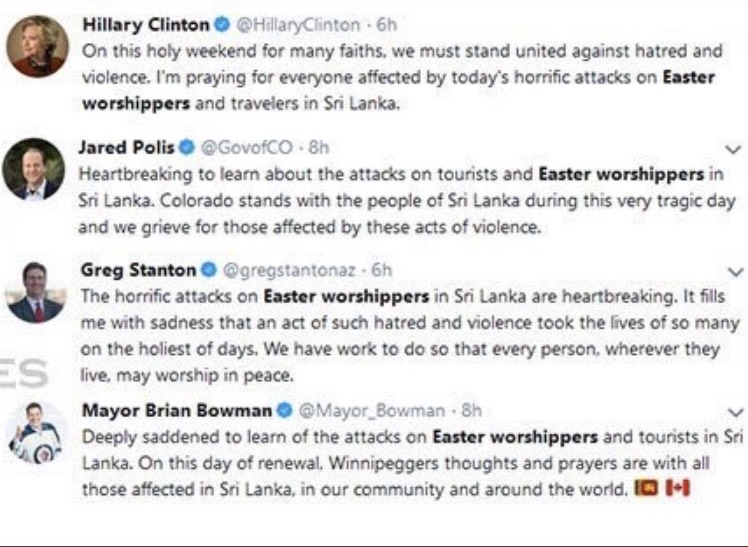 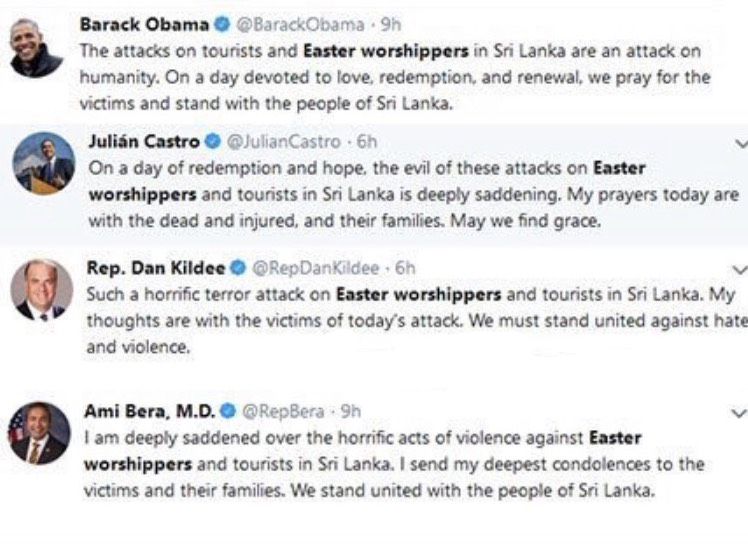 I am puzzled why they cannot admit that CHRISTIANS were killed. Here is proof they suffer from Christianophobia.

ADDED ON: Old Ozzie mentioned in the comments that the Russian President had spoken about a Western assault on Christianity and traditional values in 2013 – just before anti-Russian troubles began, so I went looking to see what he meant, and there below in the vid is what I found. Not at all what you might have expected.

Thank you for noting the typical far left media bias at the ABC, Rafe, but what can you expect? The ABC is just reflex ignorant as this article today on Venezuela provides one more example: IMF: Venezuela’s inflation on track to top 1 million percent which comes via the ever-unreliable Associated Press. Heaven forbid they should mention that socialism has had anything to do with it. Instead, their authority on the nature of the problem is no less than the President of Venezuela himself:

Socialist President Nicolas Maduro often blames Venezuela’s poor economy on an economic war that he says is being waged by the United States and Europe.
Maduro won a second six-year term as president despite the deep economic and political problems in a May election that his leading challenger and many nations in the international community don’t recognize as legitimate.

Two of the most uninformed sentences you are ever likely to find, specially designed for those who want to hide themselves from reality. It is even possible that the ABC knows better, but the last people to actually try to explain it are the ones who want the same kinds of economic management in Australia.

But this media ignorance continues everywhere. Trump Derangement Syndrome is a sickness that will do us all in and if we are not very careful put an end to Western Civilisation within a generation. The latest bit of TDS is from Troy Bramston in a column as empty and unhistorical as it is possible to be: Putin could never have suckered Reagan like Trump the chump. I will merely make the obvious point that when Reagan was president, Russia was the Soviet Union and when Reagan met with the Soviet President he was dealing with the core ideological issue of the time. As it happens, I supported Reagan then just as strongly as I support Trump now, and for much the same reasons. Russia is no longer communist, so perhaps it is time to bury the hatchet. Bramston doesn’t like Trump, but so what? He is like virtually every other media type, with nothing to add to the conversation other than empty rhetoric. Here are a few of the comments on the column at The Australian, starting from the top and working my way down. There are plenty more like these, and in fact I never came to a single comment that supported him.

So the writer was in the meeting between Trump and Putin!! I’m sick to death with this type of article. No wonder many of us no longer trust the media.

Oh my Lord … talk about Trump Derangement Syndrome writ large. This column should be compulsory study for journalism students in what NOT to write. There are so many falsehoods and opinions masquerading as fact that no-one could even begin to deconstruct it! Truly shameful, Oz.

What was Trump to do about funding 70% NATO, May’s feckless indecisive dithering over Brexit, the Steele dossier fraud, the FBI, CIA stacked with anti Trump activists, the Muller witch hunt, an irrational left wing media and the list goes on and on. But the best thing he’s done for the US is to get out of that crippling Paris Agreement. If only we had a Trump here.

Sorry Troy…..that days of journalists cherry picking factoids and creating an ideologically charged narratives are over. In this digital world, we are on to you, and what you have tried to run here I know not to be true.

Typical Trump basher. Ignorant of American history and even more ignorant of the American voter. Donald Trump’s supporters don’t care who he’s nice to or how many mistakes he makes as long as he drains the swamp. That’s what they hired him for. He has done exactly what he said he would do when on the campaign trail. That is why people like the writer of this article don’t like him. Donald Trump is not one of them. He is his own man. God Bless Donald Trump.

Mr Bramston, you and many others in the media and political elites will no doubt continue to pile on President Trump but be aware his supporters are as strongly behind him as ever and while his press conference in Helsinki was clumsy, it had no negative effect on his support in America. In fact the more they pile it on, the stronger Trump’s support may get. No doubt you also predicted with absolute certainty that Trump would never beat Hillary, and that Hillary calling Trump’s supporters “deplorables” would have no meaningful impact as well? Hmmm

Engaging in a bit of hyperbole, Troy. The EU is still in place, so too NATO, ANZUS and the rest. Unfortunately for the UK, Australia and the US, so is Theresa May. The fact that some passengers are told to pay up is not a bad thing. The fact some countries taking advantage of trade rules to the detriment of the US are told that must change is not a bad thing. That Trump talks to Putin is not a bad thing. Now, if Kim Jong Un does not deliver on his side of the bargain in Singapore, let’s see how Mr Trump responds. At that point you will be in a better position to see whether Mr Trump was wrong to give talks a chance. But if Rocket Man is sliding from his agreement, I’d be looking to see what role China has been playing in sabotaging any agreement.

“We are witnessing a fracturing of the Western liberal order and a ­decline in US global leadership”. Wrong Mr Bramston, what we are witnessing, thanks to Donald Trump, is a worldwide draining of the swamp and the hopefully the decline of the United Nations and the European Union from taking over our countries.

I’ve not read this article, looks like more Trump bashing. I’m sick of these stories/analysis by people that can’t wait to criticise, when the end of the event in nowhere in sight. Hoping and praying for failure. Can’t you wait to see how it unfolds?

Awesome news filtering in today that the great US President is considering revoking the security clearances of former top Obama era officials. They all conspired against him and need to go now and quickly. Whilst Bramston pummels the keyboard listing all the petty things Trump has done, little does he know that after Iran is fixed, the Federal Reserve will be next on the agenda. There’ll be plenty of time for Troy and his globalists friends to write angry articles about Trump – waaaay into the future as they observe, from the sidelines, the glorious wonders of the swamp getting drained!

One of the most enlightening books I have ever come across was The Victory of Reason: How Christianity Led to Freedom, Capitalism, and Western Success by Rodney Stark. And at the very end of this book there is a quote from a Chinese scholar who had been part of an investigation into the causes of Western economic success. This is a direct quote of what this Chinese scholar had said:

One of the things we were asked to look at was the success, in fact, the pre-eminence of the West, all over the world. We studied everything we could from the historical, political, economic and cultural perspective. At first, we thought it was because you had more powerful guns than we had. Then we thought it was because you had the best political system. Next we focused on your economic system. But in the past twenty years we have realised that the heart of your culture is your religion: Christianity. That is why the West is so powerful. The Christian moral foundation of social and cultural life was what made possible the emergence of capitalism and then the successful transition to democratic politics. We don’t have any doubt about this.

I was reminded of this by an article in London’s The Telegraph with the self-explanatory heading, China on course to become ‘world’s most Christian nation’ within 15 years. And while you may be sure the Chinese government has been keeping a watchful eye on where this might go, they have also not been attempting to stamp it out. And there are reasons for this, in keeping with that earlier study:

Some officials argue that religious groups can provide social services the government cannot, while simultaneously helping reverse a growing moral crisis in a land where cash, not Communism, has now become king.

They appear to agree with David Cameron, the British prime minister, who said last week that Christianity could help boost Britain’s “spiritual, physical and moral” state.

Ms Shi, Liushi’s preacher, who is careful to describe her church as “patriotic”, said: “We have two motivations: one is our gospel mission and the other is serving society. Christianity can also play a role in maintaining peace and stability in society. Without God, people can do as they please.”

In place of a moral order we now have political correctness and the pagan religion of Gaia and the environment. China, meanwhile, may become a Christian nation as we in the West depart from what may be the single most important part of the inheritance we have.