'ROSEANNE' RATINGS BLOWOUT: OVER 18 MILLION VIEWERS... DEVELOPING...
Biggest TV launch of season...
Revival's Stunning Premiere...
Can She Save America?
And you might find this of interest as well: LOL! Hillary Clinton gets a mock-tastic shout-out on ‘Roseanne’ premiere (NOT EVERYBODY is amused)
Now back to where we began: 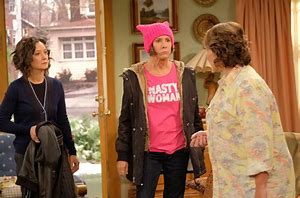 And if you go to the first link, this is what it says:

Roseanne Conner Has Become a
Trump Supporter. Just Like Her Creator.
After 21 years, “Roseanne” returns to ABC, and Roseanne
Barr’s portrait of working-class Americans is as topical as ever.

As for a sign of the future, the media are throwing away half of the American audience who somehow get Trump, when most of the over-educated nitwit class cannot see what is right before their eyes.

WITH THIS JUST ADDED AT DRUDGE:

Show’s liberal writers on their struggle: ‘Lets not be mouthpieces’…

Obviously need to curb my enthusiasm.

How did it develop that Roseanne was a Trump supporter?
When one of my agents called me to bring up me going back on the show, the way he pitched it was “Roseanne in the time of Trump.” Originally I thought, like everybody else, that she would not be a supporter of Trump. But the moment we got in the writers’ room with Roseanne, she really wanted to be a supporter of Trump, not because she is one herself, but there are a lot of people in the Midwest who voted for him. We had debates and discussions. [Writer] Dave Kaplan and I were two of the people who had least understood that there are people who voted for him who aren’t misogynists or racists and who felt betrayed by other administrations. They really believed Trump was going to do something for them. It made sense when we really talked about it.

Are you saying a majority of the other writers didn’t agree?
Most writers, including me, are more liberal than we are conservative for sure. I’m no fan of Trump at all. Some people were new to the show. We had to keep reminding people that this is not how we feel. It’s how the Conners as real people would react to what they perceive as somebody who might help them out. We are all pretty liberal people so you have to step back and say, let’s not be mouthpieces for what we believe. Let’s deal with who these characters are as people, whether we agree with who she voted for or not.

What else can they say if they ever wish to work in Hollywood again?