You want to see quite a bit of hyperbole, try this on for size:

The case of Sri Lankan asylum­ ­applicants Nadesalingam Murugappan, his wife Kokilapath­mapriya Nadarasa and their two children is the public policy ­dilemma from hell.

And what’s the issue that is so hard to resolve?

The adults separately came to Australia illegally in 2012 and 2013, claimed asylum, had those claims rejected and have exhausted every avenue of appeal.

Yet Scott Morrison forcefully, directly, powerfully made the moral as well as policy case for ­returning them to Sri Lanka.

Apparently because these are model citizens with nice children, we should throw our laws overboard and let them stay. We just yesterday turned back the sixth boat of illegal migrants from Sri Lanka so there is even more reason for making this policy stick.

But what makes this story even more disgusting are the arguments that are being used against Scott Morrison – who I am growing to like more and more with each decision he has made: Attack on Morrison’s faith splits Labor.

Opposition home affairs spokeswoman Kristina Keneally and agriculture spokesman Joel Fitzgibbon stepped up their calls for Mr Morrison to “show Christian leadership” and intervene in the case, arguing that he had put his faith in the public sphere.

This was because of his wishing to come to the CPAC meeting last month in Sydney where Keneally, because of this, became the butt end of every joke made by virtually ever speaker. Get to the final para of the story where you find this:

“Ms Keneally went so far as to describe the CPAC event as a ‘talkfest of hate’, a ludicrous accusation that merely makes use of the kind of language that is used to shut down healthy debate – a fundamental component of a liberal democracy and a free society.”

Raheem, who made it despite Ms Keneally’s best efforts, described the problems that would have followed him all of his life had a visa been refused, since forever after he would have had to tick yes on every application where it asked, have you ever been refused a visa? We thus have this self-appointed moral giant wishing to visit serious harm on someone else for massively insufficient reasons. So again quoting: from here.

Labor’s use of Scott Morrison’s Christianity in a political attack over the deportation of a Sri Lankan­ Tamil family has triggered divisions within the ALP, as federal parliament prepares to debat­e the repeal of the medivac bill and religious freedom.

Christian Labor MPs distanced themselves yesterday from two of their frontbench colleagues who demanded the Prime Minister act on his religious beliefs and allow the Tamil family to remain in Australia­ despite being found not to be genuine refugees.

In this regard I might just mention my own visa experience, which came about because of changes to Australian laws. Since until 1975, which was when I arrived, we Commonwealth members just had to show up and gain admittance. But then from January 1 that year, you had to have a migrant visa which was not all that easy to get – for me, two interviews with the High Commission in Canada, which included a university professor to assess my economic qualifications. After I had arrived, and as told to me by an English mate who came around the same time, there were thousands of English sunning themselves on Bali waiting to cross over on December 31 when, on Christmas Eve, Hurricane Tracy devastated Darwin. Wanna know how many of those English made it into Australia after that. Well, I can tell you the exact number. Not a single one. And that was when Whitlam was Prime Minister, a Labor PM, Ms Keneally. 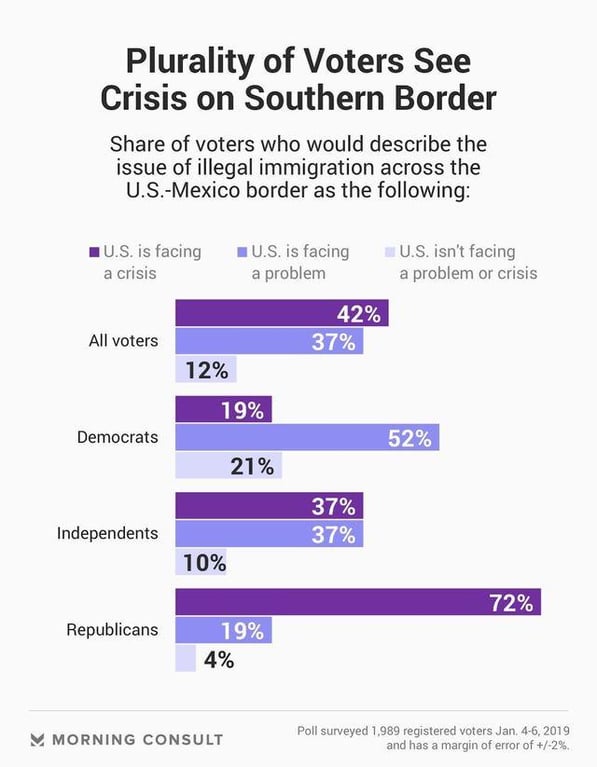 As it says at the link:

It’s the data most responsible for the sudden shift in Democrats’ tone this week as more and more in Congress give the media hints that they are willing to allocate funding for at least some of the border protection measures being pushed by President Trump. You see, it’s not that these Democrats in Congress think it’s the right thing to do but rather that the vast majority of Americans (nearly 80%) think it’s the right thing to do and so the hands of Democrats are now being forced to do something or face a serious political backlash heading into 2020.

First he kicks him out of the news conference, and when he returns he debates him. “Government is incompetent”, he says in passing, while discussing how to deal with illegal immigration. Meanwhile Ann Coulter, also on immigration:

The above-the-fold headlines at Drudge:

BORDER BREAKDOWN:
DEPORTATIONS OF ‘DREAMERS’ DROPS…
Feds to Bring in Riot Squad Against Illegal Immigration Protesters…
Clash in California…
‘Viva La Raza’…
BOIL…
‘Homeland Security’ Not Sure On Deportations…
‘We have to do right by the children’…
Border Protection Chief: ‘These Are Not Dangerous Individuals’…
PERRY: Obama either ‘inept’ or doesn’t care…
Some on right push to impeach…
WIRE: Backlash stirs against foreign worker visas…
Activist distributes flashlights to border crossers…
SHOCK CLAIM: 300 border agents under investigation for corruption…
City Leaders Shut Out Of Planning To Shelter Illegals…
Agent Contracts Scabies…
40 infected immigrants transported to CA…
Militia group heading to Texas border…
Mothers crossing at alarming rate…
500 released at bus stations every day with children…
Many schools in Charlotte NC now majority immigrant…

Nobody even pretends they’re refugees.