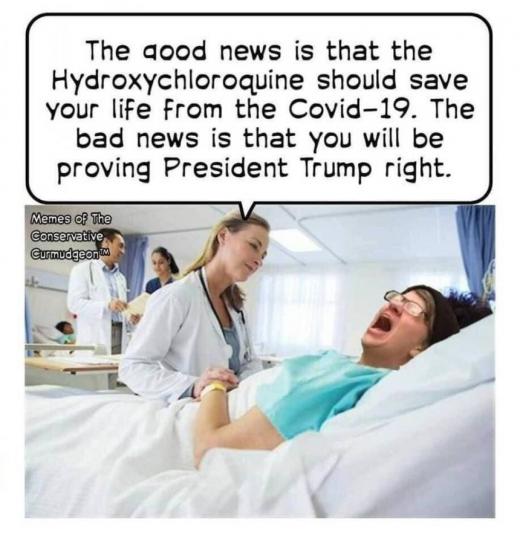 That virtually the whole of the CV episode is based on defeating Donald Trump in November is highlighted here: THE CHLOROQUINE AFFAIR – How Media Brainwashes & then Politicizes Their Audiences. That we live in a society of vast numbers of hysterics and fools is now proved beyond all possibility of refutation. No one is dying, and beyond that, there are now means of dealing with the virus that are proving virtually certain. Read it all. This is how it starts:

In a coordinated effort led by GOOGLE searches that return answers on board with Democrat narratives we see in the mainstream media that has gone into frantic hypermode denying first, and covering up second, the reports of the effectiveness of the malaria and Lupus drug PLAQUÉNIL, aka, hydroxychloroquine.

For COVID-19 treatments, the drug is to be used in conjunction with Z-Pac, Azithromycin, a short treatment antibiotic, along with Zinc.

In order to promote the MSM’s narratives (which happen to be malevolent lies that may kill countless people), the Democrat-owned media deliberately omitted the reporting of not one, but many successful clinical trials, some randomized. You will read about these next!

We took YAHOO NEWS as an example of what the people see.

In coordination with the mainstream media’s multi-pronged attacks, YAHOO set up a number of straw man ploys.

Distractions, redirections, misleading assumptions, no recollection of history, all passed on as medical advice.

Whereas the drug cocktail was used in China and elsewhere with documented success, the media has not reported the fact. The deliberate omissions problem first arose when the president of the United States mentioned that the drug might work. We should understand he did not prescribe the drug, but reacted to all the medical field reports in existence. In coordination with RESIST, the Democrat-Socialist movement to obstruct any success the president might enjoy, including his astonishing, booming economy, the mainstream media refused to cover the truth of the story immediately after the president raised the issue. That is why the media and their politicians first denied the success of the economy, then tried to talk it down, and when that too failed, tried to take the credit for it.

What we have here is a coordinated knee-jerk media that immediately rose against even testing the drug to save human lives. They would refuse people life-saving treatment merely because the president recommended it. Not because collectively they, or their “witnesses,” aka, Democrat activists they trotted out, knew anything about its effectiveness.

Democrats (and GOOGLE searches) insist it is dangerous because it has not been tested. Actually, millions of people use it regularly across the world against malaria, which was once humanity’s biggest killer. It is one of the most tested drugs ever invented. Not only is it safe in the 600-2400mg dosages (12 pills for the heavy weight adult) as it is usually used, but it is very safe. Its side effects are mainly benign and mild. Yes, as reported in the literature, some get diarrhea and suicidal thoughts. However, people have reportedly had frequent bouts of diarrhea and even committed suicide simply by watching CNN and MSDNC. Second, the media collectively warned against the Z-Pac antibiotic, because used on heart patients it carries cardiovascular risk. Patients, the media insisted, can die from it.

But dying from COVID-19 never happens, and there’s absolutely no risk to blind pedestrians running across a highway either.

People who go into politics do it because they love the power that comes with it. If there are any other reasons, they evaporate almost the moment they are elected, with the occasional honourable exception.