Following the Mueller saga has been quite a diversion from politics as it normally is, but this had occurred to me as well: Rod Rosenstein may have appointed Mueller to save Trump from Obama’s FBI and DOJ.

At this point I do think it’s very possible that Rosenstein recognized the democrat-led conspiracy and had enough.  He realized that there was no chance Trump was going to receive fair treatment because of the wide spread corruption. He then appointed Robert Mueller- to take the Russian accusations out of the hands of the FBI and the corrupt Obama Intelligence Community. The last honest man at the top of the IC was Admiral Mike Rogers. Rosenstein released the letter describing the Mueller appointment, but in August Mueller gave Mueller an additional directive allegedly to specifically investigate Paul Manafort.

Mueller then packed his team with the most virulent and rabid anti-Trump people possible. This turned out to be fortuitous. The worst possible jury found no evidence of collusion or conspiracy, a conclusion from which democrats have yet to recover.

And the President does like to to accumulate enemies of the finest kind: Trump Climate Panel Could Expose Huge Fraud, Hence the Hysteria. Would Trump approve the Adani mine? What a question!

The collective freak out over President Donald Trump’s proposed Presidential Committee on Climate Science (PCCS) highlights the fact that the hysteria surrounding the man-made global-warming hypothesis is unscientific — and that it must be re-examined by competent, credible experts. According to scientists and experts, if the science on “climate change” were truly settled, Democrats, tax-funded climate alarmists, and the establishment media would all be celebrating another committee to confirm that “conclusion.” Instead, the unhinged shrieking over Trump’s plan to investigate the matter strongly suggests something very fishy is going on, critics argued. Indeed, there is a good chance that even more fraud could be revealed.

He also accumulates some of the best people as friends as well. WATCH: Candace Owens DESTROYS Democrat in congressional hearing after getting unfairly smeared. You may want to go back and read the story to see just why she was so angry.

Candace Owens: "I think it's pretty apparent that Mr. Lieu believes that black people are stupid and will not pursue the full clip…That was unbelievably dishonest…I'm deeply offended by the insinuation of revealing that clip without the question that was asked of me." pic.twitter.com/UioMSZK93d

From John Hinderaker at Powerline. You will have to go to click to watch the videos but the story is disgraceful beyond imagination. She is also extremely brave as well.

This morning, Charlie Kirk and Candace Owens of Turning Point USA were eating breakfast in a restaurant in Philadelphia. They were spotted, apparently, by a liberal who ran to gather a mob. The mob of liberals besieged Kirk and Owens inside the restaurant, as you see here, and were waiting for them when they emerged. As you can see, the liberals are terrible human beings. One question, though: are there really people who wander around the streets carrying bullhorns?

The besiegers apparently were associated with Antifa, which Owens correctly labels a fascist organization: 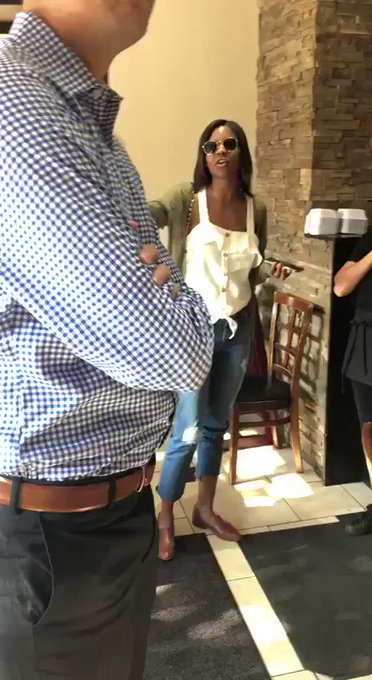 To be clear: ANTIFA, an all-white fascist organization, just grew violent and attacked an all-black and Hispanic police force.

Because I, a BLACK woman, was eating breakfast.

Is this the civil rights era all over again?

Kirk and Owens were a heck of a lot more threatened than Jim Acosta was in Tampa a few evenings ago, but I haven’t seen any tears shed by liberal media.

There is a certain irony in a gang of white fascists chanting about “white supremacy” to an African-American like Candace Owens. But no one ever accused liberal activists of having brains. 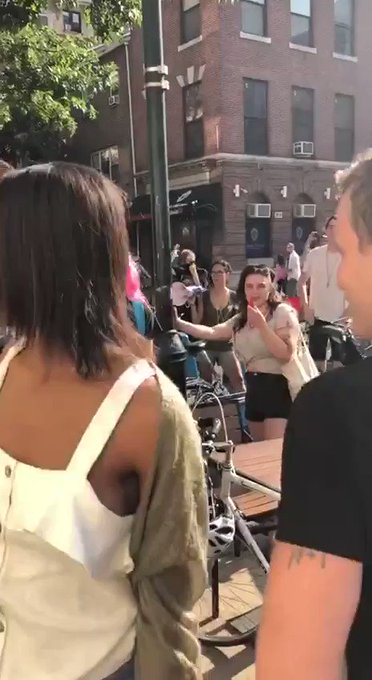 Charlie Kirk and I just got ATTACKED and protested by ANTIFA for eating breakfast. They are currently following us through Philly. ALL BLACK AND HISPANIC police force protecting us as they scream “f*ck the racist police”.

I can’t improve on Candace’s comments on the idiocy of the mob.

There is more on Candace’s Twitter feed–which, by the way, Twitter suspended a couple of days ago. Too much hate or something; they then explained it was a mistake. One more:

After all these years, white Democrats still believe that they own black people. When you go against how they desire you to think, they viciously attack you.
I was proud to stand with conviction alongside the minority police force today.

I escaped the leftist plantation.

This kind of thing is happening all the time. I keep asking myself: when will America’s voters wake up and realize that the liberals are crazy?

UPDATE: One more thing: here, one of the liberal Democrats throws a drink at Charlie Kirk:

I give Charlie lots of credit for self-restraint. He is a perfectly able-bodied guy, but managed to refrain from beating any of the liberals senseless.

And then there’s this.