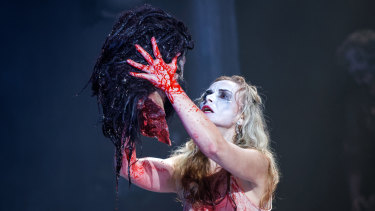 As in Dame Edna, of course, and now Bettina Arndt: Bettina Arndt labels Victorian Attorney General’s call to strip her of Australia Day honour ‘ludicrous’. And I’m not all that sure I am happy with such sexist wording in the ABC heading.

The point of the story was that Bettina Arndt received an AM in the Australia Day Honours List which has set off quite a bit of gnashing of teeth among the usual sociopaths on the left. What this has done is once again demonstrate that a large part of modern feminism is not pro-women but anti-male. This is from her article from The Spectator this week where she discusses it all. Cannot link since I have only the original typescript:

Then they rolled out a big gun – namely our former Australian of the Year, Rosie Batty, who became a domestic violence advocate after her son was tragically killed by her mentally ill ex-husband. Sadly, this once admirable woman is now a feminist puppet, endlessly sprouting misleading statistics and anti-male propaganda. Sure enough, the media reported Batty was shocked and appalled by my award, claiming my work “pits men against women”. That’s because I quote the official statistics showing at least a third of domestic violence victims are men, whilst she presents men as the only perpetrators.

So it went on. Next university journalism lecturer Jenna Price put the boot in, piling on all manner of accusations. Declaring herself an ambassador for an organisation seeking more honours for women, Price boasted she was informed by multiple sources that the vote to give this recognition to me was “both close and hotly debated” rather than the desirable consensus vote. Clearly members of this government committee were prepared to breach confidentiality regulations – such was their fury at this award going to the wrong sort of woman.

And then Nina Funnell, was revealed to have egg on her face. She had spent two years on a major hit job on me which was published earlier this week in an online rag, New Matilda. Funnell’s lengthy drivel claimed I misrepresent my professional qualifications by allowing people to describe me as a “psychologist” or “clinical psychologist,” rather than spelling out that was just my initial professional training. Then it turned out Funnell herself had described me a “clinical psychologist” in another article published earlier last weekend. What a hoot!

And, of course, “There’s Nothing Like a Dame” is from South Pacific which I assume includes us!! One more example of material from a galaxy far far away.

And from the comments: Modern Feminism’s Hated Enemy: Womanhood.

Sounds just like JBP everywhere else. And here he is talking to Bettina Arndt.

And if you are just looking for the highlights.

And with Leigh Sales on the ABC.

And on a supposed comedy interview.

This is how this last interview is described.

Controversial Canadian psychologist Dr Jordan Peterson explains to Tom why keeping his room clean is important, why identity politics suck, and why the ABC should be less Marxist.

And this is the audio from his presentation in Melbourne.