Of the first one, I can see how that might be true if things are looked at from within the United States. Looking at things from within Victoria, it doesn’t stand up, mostly because I think Daniel Andrews is too stupid to get to that conclusion. And I mean really dumb, not just that he is a fool. There are plenty of fools everywhere. The universities are filled with people who are high-IQ morons. They can reason and read. They can research and write. They can do a crossword and a sudoku. That is the kind of conclusion one of them might reach. But not DA. He is a union thug who just likes to push people around. He never discusses. He never debates. He never explains. And I think it’s because he works on some low-grade principle of capitalists-bad, workers-good. Lockdowns simply reflect his nature and intellect. Force is something he understands.

I will, however, say now that he has postponed the results of his Inquiry to November 6, I am beginning to see some reason to believe what you see below may be true, since the results of the Inquiry will be released following the end of the election in the United States. After that, according to this note, what happens to the Corona Virus will no longer matter. Almost certainly just a coincidence. 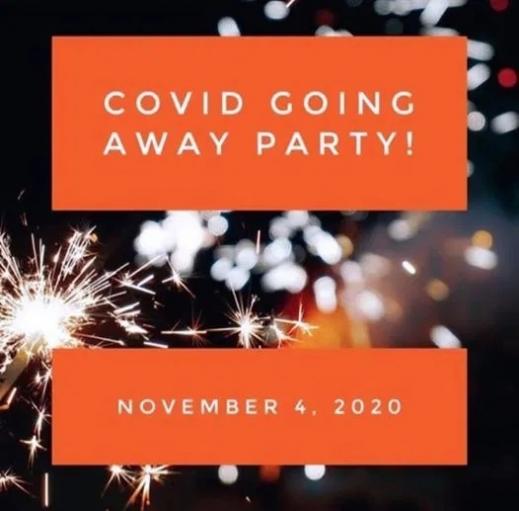 Speaking for myself, from very early on I have entirely thought of the Covid-19 “pandemic” as a hoax that has been seized upon by the left in the United States as a means to engineer the Democrats to a win in the election in November. The origins were in China and occurred either by chance or design, but once it had occurred, the dangers were seized on and amplified by the left to create the panic we now see. Everything else the left has tried had come up a bust, the American economy has performed better than possibly at any time in anyone’s memory, the Deep State and its media cohort have been exposed, and at long last there has been some kind of border protection put in place. Trump was in an unloseable position whereas now it is no better than 50-50.

As for conspiracy theories, that is all there are in politics. Every political strategy requires all kinds of people to do their part with no scripting or instructions required. Every so often there are lone players, such as Lee Harvey Oswald. The rest of the time, however, there is a general theme that is played out where everyone on both sides understand the agenda, with those promoting the agenda all making up their own means of contributing towards its fulfilment, and those on the other side doing what they can to push back. So the theme on the left was – We must do everything we can to limit the spread of death and destruction from this deadly virus. For Trump, there was no serious choice but to take this hysteria seriously, and whatever he may have personally believed, to do all he could to limit the spread of the virus. So he stopped the borders, supported lockdowns and put Dr Fauci out in front to call the shots. The rest of the world, either because they too had no choice but to play along, which in all cases required them to do something, or because they were on the left and understood the game in play, amplified the horrors by working out their own response to highlight how bad things were and how Donald Trump had screwed up the response. Meanwhile in Democrat states, everything was done to make the pandemic appear as dangerous as possible. The actions taken in New York by Andrew Cuomo were not errors of judgement but undertaken to raise as much concern as possible.

In Australia, for whatever reason, nothing happened. No major pandemic, no deaths beyond the normal seasonal total for the flu, and no real contribution to add to the hysteria other than to suggest there was no need for it.

Which brings me to Daniel Andrews who has not for nothing been called the Andrew Cuomo of Australia. It’s not as if he blundered. Everything he has done has been deliberately aimed at creating as much media-driven alarm as possible in the midst of absolutely nothing statistically of significance. But the media are also playing along to the fullest extent they can as one would expect so you would think we were back to the Spanish flu once again.

I cannot therefore promise you that you will survive the Covid panic without some kind of damage to yourselves or families, but that is far far more likely than that you or anyone you know should come to any serious harm. The harm you should worry about, and this is much more serious than anything else that might happen, is that Joe Biden should become President. That you have had the possibility you might die within the next twelve months raised by 0.005% is hardly worthy of a moment’s thought.

And this is the second letter. This is about the cost and benefits of the efforts made to contain the CV-19. Was it worth it? he asks. How will we even be able to tell and by what date can we know? Lives interrupted everywhere.

Most of the decline in output from COVID is from shutting down the economy, not from the disease itself. What would have been the economic impact of C0VID if governments had not shut down our economies? Well, we have to make some simplifying assumptions – lets try …

Bottom line: its hard to see an impact on global GDP of more than about -3% from the disease itself (-3.4% labour input with some capital and technology offsets). The forecast decline in world GDP of –5.2% this year (World Bank) means a total gap of about 8.5% (+3.3% potential growth less WB’s –5.2% forecast 2020). The global GDP decline is mostly the result of shutting down much of the global economy. Was it worth it? How many lives did we save?

1 thought on “Was it worth it? How many lives did we save?”