Typical of The Age to try to deflect guilt from those who are responsible for the massive growth of police power in Victoria. This is how the article, titled Thick blue line: Victoria builds the country’s biggest police force, begins.

Victoria has become one of the most heavily policed states in Australia after a two decade-long law and order rivalry between the ALP and Coalition helped build the country’s largest law enforcement organisation.

This is all Labor. In fact, this is all Daniel Andrews who being the stupid clod that he is, knows only force in every dealing he has with any issue. You need to go to the link to see the charts, but this is what they show. First,

Victoria Police now has 22,000 personnel and government funding worth $4 billion a year, surpassing that of NSW Police even though the northern state is three-times the geographical size with 1.4 million more people.

Victoria has 327 police staff per 100,000 population, substantially more than NSW (263) or any other eastern state or the ACT.

This, of course, is what all this is about at the moment.

“Victoria Police have been on the frontline every day of the pandemic supporting the health response and enforcing the Chief Health Officer’s directions to keep Victorians safe,” said Ms Neville. “I’m proud and supportive of the work of our police, which has undoubtedly saved lives.”

Which brings me to this: Thousands take to Melbourne’s CBD to protest new pandemic laws, vaccine mandate. 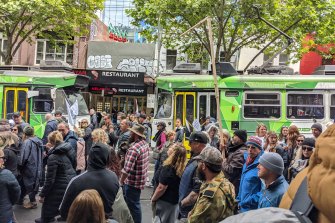 This, it seems, is where we are at:

Premier Daniel Andrews has previously said the legislation is an improvement to human rights and government transparency, but lawyers claim the laws will give politicians “a blank cheque to rule by decree” and are unlikely to achieve the outcomes promised in its current form.

And just what outcomes are these? They will have to pass the legislation for the rest of us to find out.