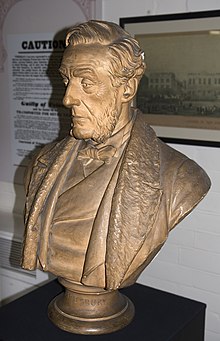 There is a notion that conservative means opposed to change, to simply allow things to stay as they are. Let me therefore bring to your attention Lord Ashley, 7th Earl of Shaftesbury. He’s the one whom Shaftesbury Avenue in London is named after. Here are some details from his life.

Ashley was elected as the Tory Member of Parliament in June 1826.

In March 1833, Ashley introduced the Ten Hours Act 1833 into the House of Commons, which provided that children working in the cotton and woollen industries must be aged nine or above; no person under the age of eighteen was to work more than ten hours a day or eight hours on a Saturday; and no one under twenty-five was to work nights. However the Whig government, by a majority of 145, amended this to substitute “thirteen” in place of “eighteen” and the Act as it passed ensured that no child under thirteen worked more than nine hours, insisted they should go to school, and appointed inspectors to enforce the law.

In March 1844, Ashley moved an amendment to a Factory Bill limiting the working hours of adolescents to ten hours after Sir James Graham had introduced a Bill aiming to limit their working hours to twelve hours. Ashley’s amendment was passed by eight votes, the first time the Commons had approved of the Ten Hour principle. However, in a later vote his amendment was defeated by seven votes and the Bill was withdrawn.

Ashley introduced the Mines and Collieries Act 1842 in Parliament to outlaw the employment of women and children underground in coal mines.

Ashley was a strong supporter of prohibiting the employment of boys as chimney sweeps.

Shaftesbury was also a student of Edward Bickersteth and the two men became prominent advocates of Christian Zionism in Britain. Shaftesbury was an early proponent of the Restoration of the Jews to the Holy Land, providing the first proposal by a major politician to resettle Jews in Palestine.

In January 1839, Shaftesbury published an article in the Quarterly Review, which although initially commenting on the 1838 Letters on Egypt, Edom and the Holy Land (1838) by Lord Lindsay, provided the first proposal by a major politician to resettle Jews in Palestine:

The soil and climate of Palestine are singularly adapted to the growth of produce required for the exigencies of Great Britain; the finest cotton may be obtained in almost unlimited abundance; silk and madder are the staple of the country, and olive oil is now, as it ever was, the very fatness of the land. Capital and skill are alone required: the presence of a British officer, and the increased security of property which his presence will confer, may invite them from these islands to the cultivation of Palestine; and the Jews, who will betake themselves to agriculture in no other land, having found, in the English consul, a mediator between their people and the Pacha, will probably return in yet greater numbers, and become once more the husbandmen of Judaea and Galilee.

Shaftesbury served as the first president of the Society for the Suppression of the Opium Trade: a lobbying group dedicated to the abolition of the opium trade.

When he died, a funeral service was held in Westminster Abbey during early morning of 8 October 1885 and the streets along the route from Grosvenor Square and Westminster Abbey were thronged with poor people, costermongers, flower-girls, boot-blacks, crossing-sweepers, factory-hands and similar workers who waited for hours to see Shaftesbury’s coffin as it passed by. Due to his constant advocacy for the better treatment of the working classes, Shaftesbury became known as the “Poor Man’s Earl”. A white marble statue commemorates Shaftesbury near the west door of Westminster Abbey.

1 thought on “Lord Ashley and the true conservative tradition”