I remember when it was considered a breach of professional ethics to diagnose the mental health of people you hadn’t personally evaluated. Another casualty of Trump-hatred, which has exposed our professional classes as ethical frauds more or less across the board.

That’s from Instapundit. There are no ethics nor is there any theory in the therapeutic state. It is just a form of social control in the hands of people who invented lobotomies and electric shock treatments. A few quotes from the comments.

The key characteristic of leftists is projection. Everything in the article about the narcissism, propensity to violence and cultist behavior applies far more to leftists than anyone who has been supporting Trump.

“Why does Trump gravitate towards violence and hatred”. I cannot believe how little self-awareness these people have. It’s remarkable.

Isn’t it also a breach of ethics to reveal the diagnosis of a patient you have examined? As in: 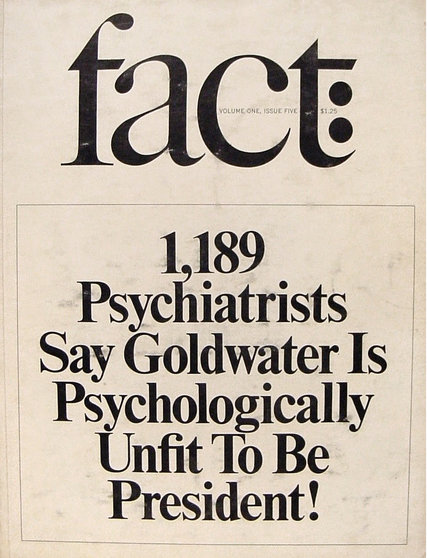 Let me also add this.

James Lindsay on “Psychopathy and the Origins of Totalitarianism.” Exit quote: “Pseudo-realities are, simply put, false constructions of reality. It is hopefully obvious that among the features of pseudo-realities is that they must present a plausible but deliberately wrong understanding of reality. They are cult ‘realities’ in the sense that they are the way that members of cults experience and interpret the world—both social and material—around them. We should immediately recognize that these deliberately incorrect interpretations of reality serve two related functions. First, they are meant to mold the world to accommodate small proportions of people who suffer pathological limitations on their abilities to cope with reality as it is. Second, they are designed to replace all other analyses and motivations with power, which these essentially or functionally psychopathic individuals will contort and deform to their permanent advantage so long as their pseudo-real regime can last.”

Psychology and psychiatry are beyond a parody and only survive because no one actually knows the kinds of things these people believe and the notions they apply.

1 thought on “There are no “professional ethics” on the left”