I don’t know if anyone else has commented on this, but I find it interesting that this protest was to be in Ballarat, the same city as The Eureka Stockade. I no longer expect the same result if it goes to court as the first time round, nor the same reaction of the people of Victoria, since we no longer seem to have the same kind of reaction to oppressive authority we were once famous for. 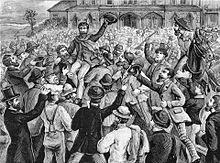 Thousands of Melbourne residents celebrated the acquittal of the rebels, and paraded them through the streets upon their release from the Victorian Supreme Court.

Of course, the miners were part of a tax revolt. The Covid adventure has been presented as a freebie to save us from a virtually non-existent death threat. You want to see what’s coming. This was the lead story at the Oz today: Josh Frydenberg’s plan to fight back from Covid collapse. The first para should strike terror into the hearts of everyone, but it won’t:

Josh Frydenberg is preparing a five-year plan to create millions of jobs and reignite business investment, to anchor Australia’s recovery from the most severe recession since World War II.

Has the Dan Andrews economy gone national? Hope not, but maybe.

1 thought on “The return of the Eureka Stockade”