Feminism has its mighty grip on our culture and will not let go any time soon. This began from an Instapundit post on Sheryl Sandberg gives awful advice to women. Follow it at your peril and the following, from Captain Capitalism, was quoted in one of the comments.

I skimmed your piece in the Washington Examiner because I already knew what it was going to say; just wanted to make sure.  And sure enough it said what I thought it would.

Women are not men.
We’re supposed to compliment each other.
We are not adversaries.
Leave the proposing to men.
Feminism has ruined women and made them miserable.
Insert examples of miserable women here.

But may I ask you to entertain a new approach?  One that might be more effective in convincing future women that feminism is not the way?  And one that will be less frustrating than merely saying “Sheryl Sandberg bad.”

Leave Sheryl Sandberg alone.
Leave the women who follow her advice alone.
Matter of fact encourage them, or just not bother with them at all.

And the reasons for this approach are many.

First, you are not going to convince any woman today to abandon feminism and go with traditionalism.  You yourself provided several examples of what I can only imagine to be middle aged women with children and careers who are facing problems in their marriages.  Do you think at that age and with that much infrastructure invested in a non-traditional life they can just uproot all of that midstride and in a flip of a switch go to a traditional 1950’s nuclear family?  Additionally, it doesn’t sound like they’re abandoning their roles, just complaining about them.  And these are women who have a receptive ear to traditionalism.  Traditionalism just not powerful enough to override their entire life’s investment they’ve made in feminism or the buyer’s remorse they most certainly have.  You’ve cured no one (or at least very few).

Second, do you think your article, along with every traditionalist argument made in the past 30 years even holds a candle to the trillions of dollars and billions of human hours that have been invested in now-three generations of women to follow a feminist life philosophy?  This isn’t to say you’re wrong.  You are factually right.  But did you have all young women’s ears from K-thru-college?  Did you control the media?  Do you have a best selling book like Ms. Sandberg?  And do you control academia?  For every hour (if an hour at all) a mom taught her daughter about being a good mother or wife, supporting her man, staying svelte and beautiful, etc., there were at least a thousand hours of feminist counter-propaganda installed in young women’s minds.  And to give you an example of how out gunned and out-spent traditionalists are compared to feminists I’ve provided an infographic below. 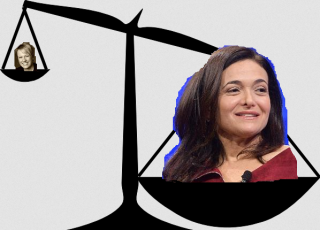 Third, do you really think women are going to listen to you?  I can completely sympathize with you and your goal to offer women an alternative to the feminist lifestyle they’ve had forced on them.  I understand the moral, noble intention you have to provide a solution or at least an option to women who are not happy with their love lives.  But take it from me dear, they won’t listen.  Humans are programmable automatons, not the “independent minded” sentient beings they fancy themselves to be.  And though I’m willing (and hopeful) to be proven wrong, I’m going to guess the success rate you’ve had of convincing women to become traditionalists are about the same as mine to get people to spend less than they make, eat less calories than they expend, and get young people to stop majoring in stupid shit.  Zero. Which then behooves the question for you as to whether or not you want to put yourself through this banging-your-head-against-the-wall-torture.

Finally, there is also a nuanced, esoteric argument to be made about balance, karma, and universal equilibrium.  Do these women, after decades of feminism, outsourcing their kids to daycare, putting their careers above humans, things above love, deserve to “be saved?”  Do they deserve to find “happiness” and “love?”  I personally don’t believe any of them will be convinced of the merits of a traditional life/relationship, making this question moot.  But what I am trying to do is make you question your own (albeit moral, noble, and well-intended) incentives.  How many of these women simply loved their careers more than their children or husbands?  How many of these women valued a corner office or a fancy title more than human interaction?  How many of these women in the past probably turned down perfectly good men that would have otherwise made great husbands, all for an unanchored religion like feminism?  And how many of them were just plain mean and unfeminine in the past to men?

Though noble, your goal is not only impractical, but is getting in the way of universal karma that is going to be delivered anyway.  There is nothing you can do to stop it.  The only person you can save is yourself.  So please, let women have what they want.  Let women have what they choose.  Treat women as equals and let them make their own choices in life.  But above all else, truly treat them as equals in letting them reap the costs and consequences of those choices.  And perhaps then you may find some solace in learning to “Enjoy the Decline.”