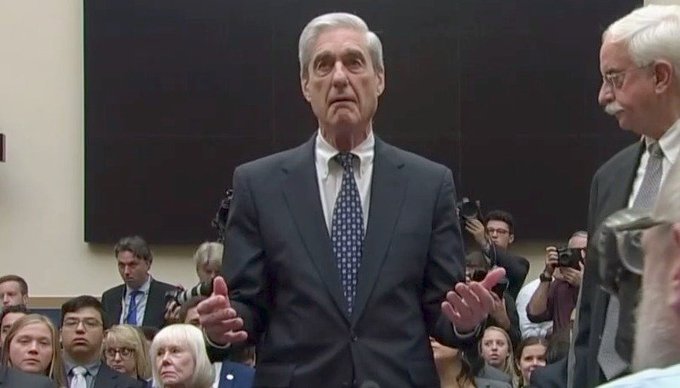 The most obnoxious part of the “testimony” is how deceitful the Democrats remain. They restate their accusations without evidence from Mueller’s testimony just as there was none in The Report itself. The above is from Drudge. This is from Instapundit.

MUELLER SAYS HE IS ‘NOT FAMILIAR’ WITH FUSION GPS, THE FIRM BEHIND THE STEELE DOSSIER:

Mueller revealed his surprising lack of familiarity with the firm during an exchange with Ohio Rep. Steve Chabot, a Republican member of the House Judiciary Committee.

“I’m not familiar with that,” said Mueller, while scouring through his 448-page report of the Russia probe.

“Let me just help you. It was. It’s not a trick question or anything. It was Fusion GPS,” said Chabot.

And from Andrew McCarthy: With Collusion Collapse, Public Loses Interest in Mueller Theatrics.

Mueller seems to have lost interest as well: ‘The years have clearly taken a toll:’ Reporters from NBC, NYT question health of Robert Mueller.

Mueller is such a weasel! Limited questions from every area that reveal just how deceitful he has been. Madly, the accusation is that Trump ran for President so that he could build a hotel in Moscow. Worse than pathetic. And Alexander Downer makes a feature appearance!

ADDING THIS FROM INSTAPUNDIT:

THE SHOCKING CONCLUSION: Mueller “was not about finding the truth.”

With this from the Instapundit comments:

For the umpteenth time:

Today’s left, including now the leadership of the Democrat Party, does not believe in the concept of objective truth.

They don’t seek the truth because they don’t think it even exists. Evidence, facts, and other variations of “the truth” don’t exist for them either.

If you need to understand this concept in your bones, the best book on it is Explaining Postmodernism.

As part of his attempt to discredit the Russia investigation opened by the FBI in 2016, Rep. Devin Nunes, the California Republican who is the intelligence committee’s ranking Republican, just said that the inquiry was “not opened based on an official product from Five Eyes intelligence, but based on a rumor” from an Australian diplomat, Alexander Downer. Downer was the Australian who told the FBI that George Papadopoulos, a Trump campaign foreign policy adviser, boasted over drinks in London that summer that he’d heard that the Russians had dirt on Hillary Clinton, in the form of stolen emails.

Papadopoulos later admitted to the FBI that he had first heard this from Joseph Mifsud, a Maltese professor with contacts in the Russian foreign ministry who said that Russia had obtained thousands of Clinton-related emails.

Downer, the Australian diplomat, alerted the U.S. government in July 2016, only after what might have seemed like a drunken boast at the time took on a menacing cast when WikiLeaks began releasing Clinton-related emails stolen from the Democratic National Committee by Russian hackers.