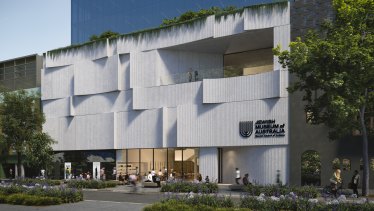 An artist’s impression of the proposed Jewish Arts Quarter in Elsternwick.

In the morning, on the way to the station I turn right onto Sinclair Street and there is Sholem Aleicham with all of the children playing in the playground. And then I turn left onto Selwyn Street which is where the Holocaust Centre is located. Same Jewish children exactly, only separated by place and date. It often spooks me out. This is from The Age today:‘Our own Lygon Street’: Jewish arts precinct set for Elsternwick.

Melbourne could get its own “Jewish Lygon Street”, showcasing the diaspora’s art, history and culture in the city’s south.

From Israeli dance workshops to Yiddish performances, art and craft markets, and street festivals, it is hoped the quarter will be a creative hub to learn, shop, eat, meet and schmooze.

Project co-chair Joe Tigel grew up blocks away from the Kadimah, where his father, a Holocaust survivor, threw himself into cultural life after arriving in Australia from Poland through Germany following the Second World War.

“The Kadimah was this massive repository of Jewish life because the post-Holocaust generation … came to see it as its cultural home,” he said. “It gave you a richness of being.

“We just enjoyed [a] celebration of being who we were and freedom.”

Mr Tigel, who is also the Kadimah’s vice-president, described the new quarter as an expansion and reimagining of the area that would provide a cultural home for generations to come.

He said while Melbourne had many Jewish religious and educational institutions, it lacked a hub that catered to the diversity of Australian Jews.

“We want to be a broad church and that is to give a sense of Jewish culture, creativity, expression, without dogma,” he said.

Mr Tigel hoped the precinct would attract all Melburnians, similar to how people travel to Oakleigh for Greek culture and to Footscray for Vietnamese experiences.

“This is an opportunity for our community to celebrate itself, but also for others to be welcome in it and start to get a feel for our food and culture,” he said.

Jewish Museum of Australia director Jess Bram said it was “phenomenally exciting” and a once-in-a-lifetime opportunity for the organisations to offer an experience as a collective. 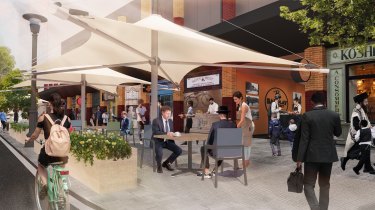 “It’s a reinvigoration of Jewish life and culture in one streetscape,” she said. “There’s a profound impact that will have, not only in the way that we engage with our audiences and the Jewish community, but more globally as well in terms of the storytelling that we can do.

“There’s going to be some magic that comes to Elsternwick.”

“The best way to combat hate is through education and experience,” he said. “It will teach the worst atrocity known to man … the Holocaust, but also show … how resilient the Jewish community has been. It’s creating our own Jewish Lygon Street.”

Glen Eira mayor Margaret Esakoff said although the proposal was yet to go before the council, it had been well received.

“It has certainly been something that we’ve envisioned as being appropriate for this particular part of Elsternwick,” she said.

“It should be something that ends up very valuable and vibrant.”

Residents have been rallying against another proposal for Selwyn Street, on the corner of Sinclair Street, where supermarket giant Woolworths wants to turn ABC’s old studios into twin towers, one 14 storeys high.

The proposal by the supermarket, which is before the Victorian Civil and Administrative Tribunal, includes selling a 1000-square-metre space to the Jewish Arts Quarter at a reduced rate.

Stop the Elsternwick Towers member Kathy Deacon said the group was in favour of the Jewish quarter, but against the Woolworths development.

Locating a supermarket on a site that can only be serviced by trucks running along small side streets and opposite the School must be against every form of zoning regulation ever devised. We hardly need another supermarket in the area, but this would be unique. And in a perfect setting for what it wishes to become.

1 thought on “The Jewish Arts quarter in Elsternwick”