I will have to apologise since I calculated the cost-per-life-saved incorrectly in my previous post. I had estimated the number at $30 million per person saved by the shutdown of the economy. I have, however, been contacted by an actuary who has alerted me to the same costing error as noted in the comments by Bad Samaritan:

Steve. I agree 100%, but have just re-read your cry-from-the-heart, and I come up with it costing three hundred million per life saved; not $30 Million.

This makes it even more imperative that strong steps be taken to do something since a human life is worth ten times more than any of us first thought!

The actual cost-per-life-saved is $300 million. And that is an accurate estimate of the cost, and until the government provides a better one, this seems as accurate as one can work it out. Of course, the same ethical principles apply as previously.

I will however note by way of an explanation that I am hardly the first person in the midst of this pandemic to get their numerical estimates wrong although I may be the only one to have reduced the impact in the calculations I had made. Let me highlight a bit of what’s going on. First this: Dr. Birx: Government Classifying All Deaths Of Patients With Coronavirus As COVID-19 Deaths. Hmmmmm:

According to the response coordinator for the White House coronavirus task force, the government is classifying all deaths of patients with coronavirus as COVID-19 deaths.

Dr. Deborah Birx made that announcement during Tuesday’s briefing. She confirmed the classification will be made regardless of any underlying health issues that could have contributed to loss of life.

The task force coordinator went on to say the federal government is continuing to count the suspected COVID-19 deaths despite other nations doing the exact opposite.

“There are other countries that if you had a pre-existing condition, and lets say the virus caused you to go to the ICU and then have a heart or kidney problem, some countries are recording that as a heart issue or a kidney issue and not a COVID-19 death,” she explained. “Right now, we’re still recording it.”

That is, every number you see coming from the United States has been amplified as a matter of policy. And here is further confirmation: HOW HONEST IS THE COVID FATALITY COUNT? About as honest as you might expect from governments who have gone hysterical in predicting doom and disaster.

Dr. Scott Jensen is both a physician and a Minnesota state senator. Yesterday he was interviewed by a local television station and dropped a bombshell: he, and presumably all other Minnesota doctors, got a seven-page letter from the Minnesota Department of Health that gave guidance on how to classify COVID-19 deaths. The letter said that if a patient died of, e.g., pneumonia, and was believed to have been exposed to COVID-19, the death certificate should say that COVID-19 was the cause of death even though the patient was never tested, or never tested positive, for that disease.

And among the comments there was this:

We are dealing with out and out fraud. There is then this: CDC Director: Virus Death Toll Will Be ‘Much, Much Lower’ Than Models. Also reported here: Fauci admits previous projection of 100K-240K coronavirus deaths was likely an overestimate. But what do we get in the papers, just sent to me online this morning: NEW YORK’S SHOCKING VIRUS STATISTIC AS UK DEATHS SPIKE.

New York and New Jersey have both seen their daily death tolls jump to unwanted new records on Wednesday (local time) for the second day in a row, while New York City’s coronavirus toll surged well past 4500 — significantly more than the number killed in the September 11 terror attacks.

Saw this chart a few days ago from NYC health officials. Looking at the deaths AND previous underlying health conditons is very compelling. Of 1139 deaths at that moment in time only 14 of them did not have underlying health issues. And they are scamming us in another way also. They started couting the “confirmed” cases with case #1 and counting. So this is eventually going to be a really big number, the kind the media and dem party just love.Where it gets less than honest is when they fail to deduct the “recovered cases” from the original number. The Maine CDC gives me a chart in various ways but does the same thing. I am taking their info and have been making my own chart for ten days. I do the simple arithmetic and have a column showing just “active” cases, those who still are treating for it. The number of recovered cases as a percentage of confirmed cases is growing steadily. I wrote to them late today and suggest they show the “active” as another column in order to help give people some peace of mind. I also asked them for a chart of the death rate vs underlying health issues. Not sure what I will get for an answer. 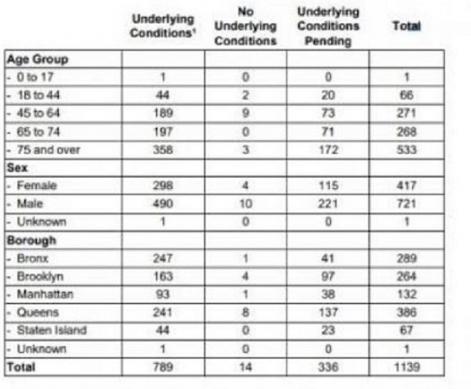