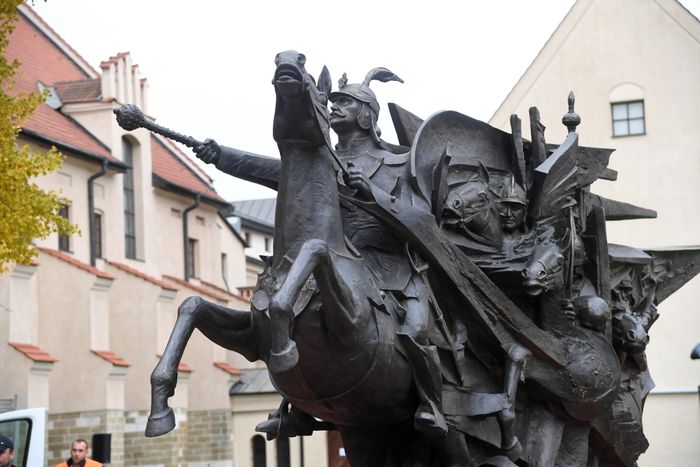 When we were in Kraków last year, we went to see the last resting place of Jan III Sobieski as well as the two statues of him in the city. If you don’t know who he is, think of that as par for the modern course. He is, nevertheless, one of the great men of Western history.

So now this: King Sobieski monument erected in Kraków after Vienna says it’s too controversial.

A monument of Polish king Jan III Sobieski has been placed on a platform trailer in front of the Papal Window in Kraków.

The monument has been put on temporary display to remind people of its existence after authorities in Vienna withdrew from a long-term plan to erect it on Kahlenberg hill in Vienna, from where the Polish king launched his history-changing attack 336 years ago.

Up to now, thirteen attempts have been made to erect a monument in Vienna in honour of the Polish king who relieved the siege of the city. This latest attempt looked set to be successful….

However, last July, the new mayor of Vienna, Michael Ludwig, announced that he was withdrawing from the project.

A coward, traitor and repulsive. Same as when I was in Tours looking for the site of the Battle of Tours in 732. It would have been one thing not to have commemorated the battle, or even to have lost sight of where it had actually taken place. What amazed me most was that all but one in the tourist office had even known of the battle’s existence.

Comment: 18,000 armed and mounted knights charging towards the Ottomans would’ve been a real-life Lord of the Rings battle. It’s one of the top 10 battles I wish I could’ve seen.

Response: Tolkien based that battle in LOTR on the Breaking of the Seige of Vienna.