Re Whistleblowers: Eric Ciaramella or Voldemort? I suppose we can mention his name in Australia.

Very early on in the whistleblower saga, I asked, plaintively, who the “whistleblower” knew. There’s been lots of action on the topic since then, and it looks increasingly like the answer is “everyone.”

I’ve been trying to keep up with all the traffic on this, and frankly, it makes my head hurt. But not too long after my article, Paul Sperry at Real Clear Investigations reported extensive evidence that the person I was calling “whistleblower one” (WB1) was a man named Eric Ciaramella, who:

My suspicion is that the Whistleblower is such a comprehensive nobody that letting his name come out deflates the entire impeachment process. Like finally finding out what a nobody the Deep Throat of the Watergate Investigation was. Once you knew, and understood his petty motives, it really was a scandal that it had ever been a scandal.

As for Clarabell the Clown, entirely from my youth and very very North American. From the Howdy Doody show. 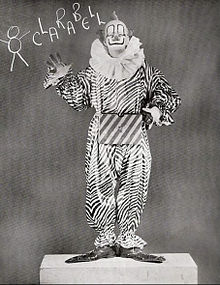 A bit more on Howdy Doody which I had not known before with something of an Australian connection.

The whole thing is so politically incorrect I’m amazed it can still be found on the net.