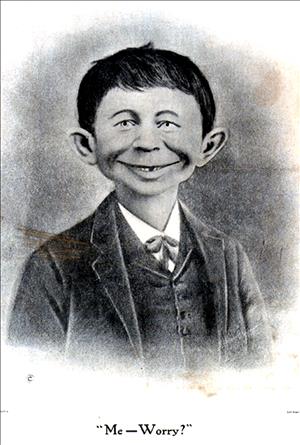 That’s right, the date on that picture, along with the caption, are correct: 1914! The illustrator was Harry S. Stuff and that was his real name. For more, read here, which includes this:

Of all Stuff’s graphic design works, the one that that he is best remembered for was a poster he called “The Eternal Optimist.” On June 24, 1914, a federal Register of Copyright was granted to “Stuff and Wilson” for this illustration of what would later be described as: a “picture of a boy with a broad, vacant smile revealing a missing tooth, and large outstanding ears and uncombed hair, which make him appear half-witted. The words ‘Me — Worry?’ appear directly underneath the illustration”

This has all come out because PDT compared one of the Democrats running for President to Alfred E. Neuman.

POLITICO: What do you think about [South Bend Mayor] Pete Buttigieg? I know you mentioned him once in your rally, but do you think he’s a threat in any way?

Weirdly, when asked, Buttigieg [pronunciation unknown] said he had never heard of A.E.N. which led to this comment:

“Not having heard of Alfred E. Neuman is arguably more disqualifying than resembling him.”