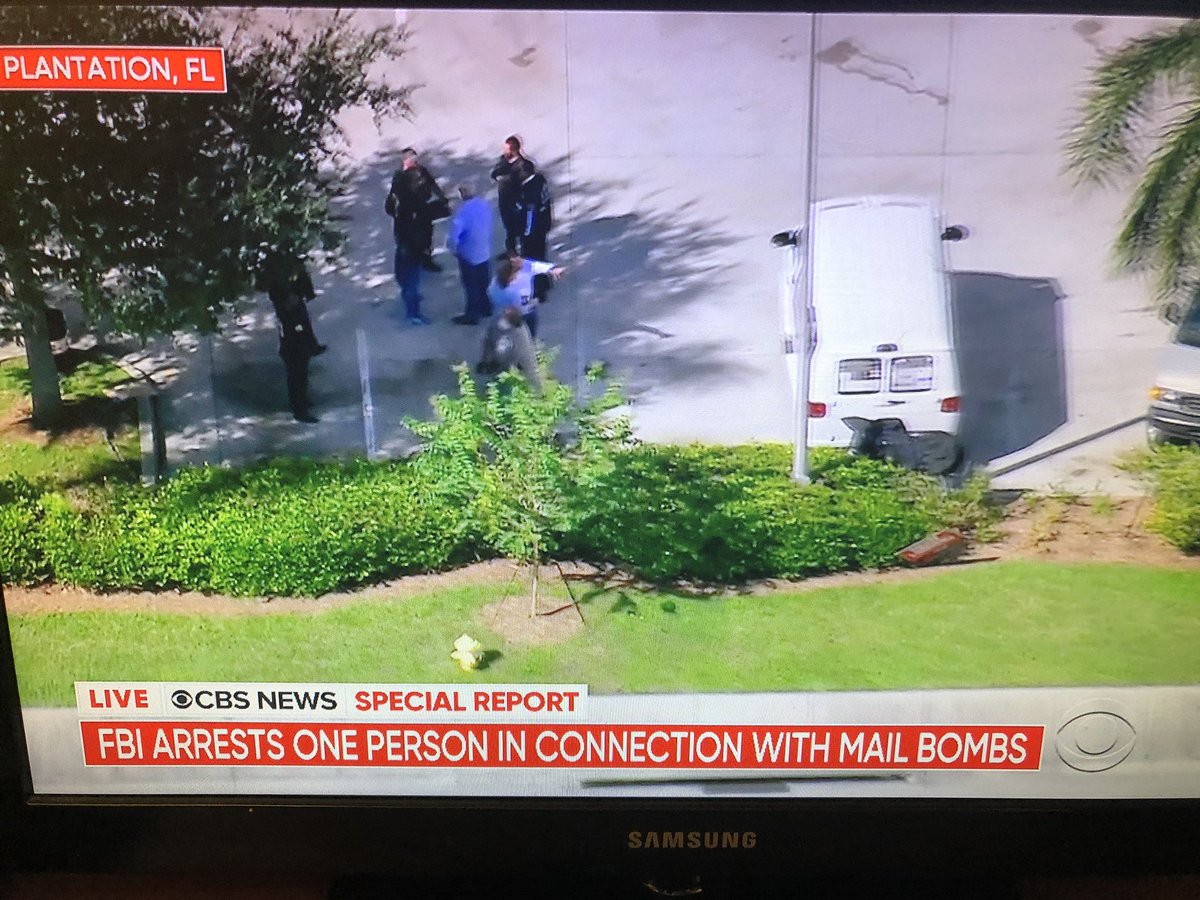 GOT HIM?
SUSPECT IN CUSTODY

I can see many advantages to the Democrats from the fake bomb business. It changes the subject from how well PDT and the American economy is doing as the US heads into the last week before its mid-term elections. They get to pretend they are victims, which is an important leftist meme. The party of Antifa gets to harangue on the importance of civility in politics. All of the media can go off on another set of rants about Republicans. Best of all, no Democrat was ever in the slightest danger of harm since none of the ones on the target list open their own mail.

And no matter how I look at it, I cannot see this as anything other than a very sophisticated Democrat operation. All these bombs and not an arrest in sight. The kind of deep knowledge one would need to pull off even one of these without detection is quite intense, never mind eight or nine, with the numbers still rising. And if they do pin it on someone eventually, I suspect it will be along the lines of the chap Hilary stitched up for the murders in Benghazi because of some video he had produced. Not only liars to the core, but presenting their lies to some of the most willingly gullible who have ever lived. Just the kinds of people who will take global warming and Keynesian economics as valid reflections of reality.

In my view, but who knows, we are never going to know who really sent these fake bombs to this almost perfectly concocted target list. And I can only say there must be some really irritated lefties who feel genuinely affronted by not having been included in the A list of targets. Meanwhile, GOP candidate received letter threatening his 7 children.

Criticizing a candidate on the issues is part of politics. Threatening my children is not. We are thankful for the… twitter.com/i/web/status/1…—
Jay Webber (@JayWebberNJ) October 24, 2018

That one looks a lot more genuine than the rest. And for the record, I am also as cynical about the fall in share markets around the world. How hard would it be for George Soros and his mates to sell off a parcel of shares all by themselves just to depress the market for a week or two even while the Fed starts to raise rates?

Meanwhile, there are all those people who are voting for a living, and they enter the US by the caravan full: Half America Gets More In Welfare Than Pays In Taxes…

Donald Trump has been a respite from this relentless effort to undermine the values and integrity of the West and our way of life. Enjoy it while you can for après Donald le déluge.

PROVIDING BALANCE: There is, of course, the possibility that whomever has been sending these phoney bombs through the mail is actually a Republican. How can this be denied, since we have zero idea of who has done it or why. To provide us with the additional certainty such moments require is what CNN is for: Debunking the despicable ‘false flag’ theory on the mail bombs. Summarising:

Campaign politics tends to be a lowest-common-denominator business. If something works — no matter how loathsome or even untrue — then it gets used. The end always justifies the means — and the end is always and only winning.

And yet, even by that incredibly low bar, what some right-wing pundits have done in the wake of 10 mail pipe bombs being sent to prominent prominent Trump critics, Democratic politicians, party donors and CNN’s New York office is astonishing. In short: They have suggested — with zero evidence — that is all one big hoax designed to help Democrats in the 2018 midterms, a classic “false flag” operation….

This is both hugely cynical and incredibly logistically difficult. The cynical part is self-explanatory. But consider what Limbaugh and his ilk are suggesting — from a purely logistical perspective. Here’s what would have had to happen for the events of Wednesday to be a false flag:

1. Someone or someones who wanted to help Democrats — and the media, I guess, somehow? — would send a series of pipe bombs to prominent Democrats around the country.

2. Then Democrats or the media or, again, someone, would have to have coordinated with the state and local police — not to mention federal authorities — so that law enforcement said that these were functional bombs (even though, again, according to this theory, they weren’t).

Which, um, is not what happened. As any reasonable person — regardless of your political affiliation — can recognize that that sort of broad conspiracy not only stretches the bounds of the possible but snaps them in two.

It is all so obvious, I am amazed such clarity has only occurred within the Democrat media and to no one else.