The video is from Peter Hitchens: There’s powerful evidence this Great Panic is foolish, yet our freedom is still broken and our economy crippled.

Most people will, by now, have viewed the online film of Metropolitan police officers bellowing officiously at sunbathers on Shepherd’s Bush Green in London, energetically stamping out the foul crime of lying on the grass (would they have paid so much attention, two weeks ago, to a gaggle of louts making an unpleasant noise, or to marijuana smokers?).

Others will have seen the films, taken by Derbyshire police drones, of lonely walkers on the remote, empty hills, publicly pillorying them for not obeying the regulations. It is genuinely hard to see what damage these walkers have done.

But as a former resident of the USSR, I can tell you that this sort of endless meddling by petty authority in the details of life, reinforced by narks, is normal in unfree societies – such as we have now become for an indefinite period. It is, by the way, also a seedbed for corruption.

Meanwhile, our economy is still crippled, and the overpraised Chancellor Rishi Sunak, like some beaming Dr Feelgood with a case full of dodgy stimulants, seeks to soothe the pain by huge injections of funny money.

And there is now the great retreat from all the alarmism.

Crucially, those who began by claiming that we faced half a million deaths from the coronavirus in this country have now greatly lowered their estimate. Professor Neil Ferguson was one of those largely responsible for the original panic. He or others from Imperial college have twice revised his terrifying prophecy, first to fewer than 20,000 and then on Friday to 5,700.

He says intensive care units will probably cope. And he conceded a point made by critics of the panic policy – that two-thirds of people who die from coronavirus in the next nine months would most likely have died this year from other causes.

Seriously, if you want this madness to end anytime soon, cut public service wages by 25% so that we can “all share in the sacrifice”.  It would then be over in a fortnight. And if that doesn’t persuade you, it might also be about to come to an end “because of the publication early last week of a rival view, from distinguished scientists at Oxford University, led by Sunetra Gupta, Professor of theoretical epidemiology? It suggests that fewer than one in a thousand of those infected with Covid-19 become ill enough to need hospital treatment.”

If that is really true, we are insane to let this go on for even another day.

Shepherd’s Bush is where I used to live when England was still a free country. 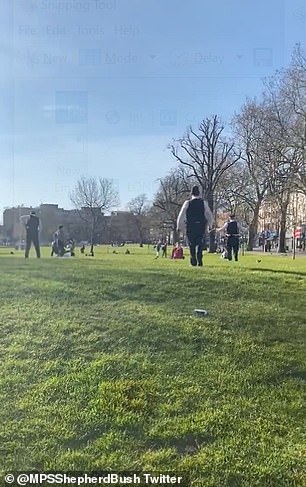 Officers approach sunbathers on Shepherd’s Bush Green in London, energetically stamping out the foul crime of lying on the grass (would they have paid so much attention, two weeks ago, to a gaggle of louts making an unpleasant noise, or to marijuana smokers?).