I still head to the city every day on the train along with many others, while others that I know are now staying home and avoid crowds. From Instapundit.

ADVICE: Cancel Everything. Social distancing is the only way to stop the coronavirus. We must start immediately.

Related: When Danger Is Growing Exponentially, Everything Looks Fine Until It Doesn’t.

There’s an old brain teaser that goes like this: You have a pond of a certain size, and upon that pond, a single lilypad. This particular species of lily pad reproduces once a day, so that on day two, you have two lily pads. On day three, you have four, and so on.

Now the teaser. “If it takes the lily pads 48 days to cover the pond completely, how long will it take for the pond to be covered halfway?”

The answer is 47 days. Moreover, at day 40, you’ll barely know the lily pads are there.

That grim math explains why so many people — including me — are worried about the novel coronavirus, which causes a disease known as covid-19. And why so many other people think we are panicking over nothing.

During the current flu season, they point out, more than 250,000 people have been hospitalized in the United States, and 14,000 have died, including more than 100 children. As of this writing, the coronavirus has killed 29 people, and our caseload is in the hundreds. Why are we freaking out about the tiny threat while ignoring the big one? . . .

But go back to those lily pads: When something dangerous is growing exponentially, everything looks fine until it doesn’t. In the early days of the Wuhan epidemic, when no one was taking precautions, the number of cases appears to have doubled every four to five days.

The crisis in northern Italy is what happens when a fast doubling rate meets a “threshold effect,” where the character of an event can massively change once its size hits a certain threshold.

In this case, the threshold is things such as ICU beds. If the epidemic is small enough, doctors can provide respiratory support to the significant fraction of patients who develop complications, and relatively few will die. But once the number of critical patients exceeds the number of ventilators and ICU beds and other critical-care facilities, mortality rates spike. . . .

The experts are telling us that here in the United States, we can avoid hitting that threshold where sizable regions of the country will suddenly step into hell. We still have time to #flattenthecurve, as a popular infographic put it, slowing the spread so that the number of cases never exceeds what our health system can handle. The United States has an unusually high number of ICU beds, which gives us a head start. But we mustn’t squander that advantage through complacency.

So everyone needs to understand a few things.

First, the virus is here, and it is spreading quickly, even though everything looks normal. Right now, the United States has more reported cases than Italy had in late February. What matters isn’t what you can see but what you can’t: the patients who will need ICU care in two to six weeks. . . .

Second, this is not “a bad flu.” It kills more of its hosts, and it will spread farther unless we take aggressive steps to slow it down, because no one is yet immune to this disease. It will be quite some time before the virus runs out of new patients.

Third, we can fight it. Despite early exposure, Singapore and Hong Kong have kept their caseloads low, not by completely shutting down large swaths of their economies as China did but through aggressive personal hygiene and “social distancing.” South Korea seems to be getting its initial outbreak under control using similar measures. If we do the same, we can not only keep our hospitals from overloading but also buy researchers time to develop vaccines and therapies.

Fourth, and most important: We are all in this together. It is your responsibility to keep America safe by following the CDC guidelines, just as much as it is House Speaker Nancy Pelosi’s or President Trump’s responsibility to lead us to safety. And until this virus is beaten, we all need to act like it.

–
LET ME ADD THIS TO THE CONVERSATION: I’m not trying to scaremonger, and I know how the media is in it as a means to subvert PDT’s re-election, but let me also mention this: Coronavirus: Five days before virus ‘tidal wave’ hits Australia which has lots of stats and comment, including this: 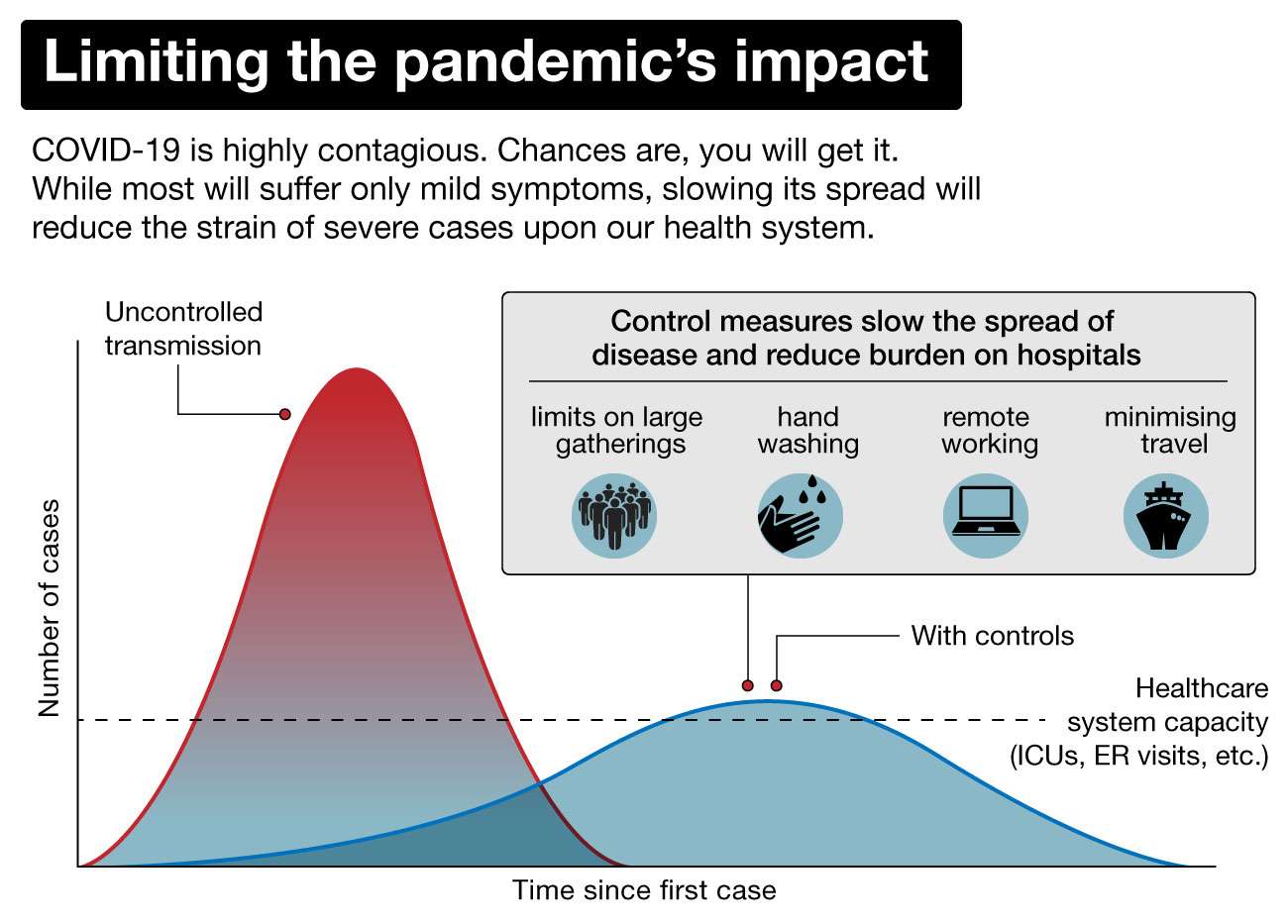 BUT LET ME FINISH OFF WITH THIS: On the more upbeat side: Military Surgeon: ‘Trump Is Right’ on the Seasonal Flu Being More Dangerous than Coronavirus. I’ve been amazed how dangerous the flu is although how comforting that might be is hard to say.