Every member of the Ku Klux Klan was a Democrat, with only the very occasional exception, as may be seen from this list. And as offensive as I find the text below, which is taken from the list taken from Wikipedia. The efforts by the Democrats to ignore their own history is understandable, but is nevertheless built on a series of lies. 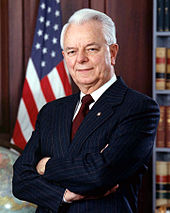 Senator Robert Byrd was a Kleagle, a Klan recruiter, in his 20s and 30s.

Robert C. Byrd, was a recruiter for the Klan while in his 20s and 30s, rising to the title of Kleagle and Exalted Cyclops of his local chapter. After leaving the group, Byrd spoke in favor of the Klan during his early political career. Though he claimed to have left the organization in 1943, Byrd, wrote a letter in 1946 to the group’s Imperial Wizard stating “The Klan is needed today as never before, and I am anxious to see its rebirth here in West Virginia.” Byrd attempted to explain or defend his former membership in the Klan in his 1958 U.S. Senate campaign when he was 41 years old.[1] Byrd, a Democrat, eventually became his party leader in the Senate. Byrd later said joining the Klan was his “greatest mistake.”