Let me start by explaining the basic framework. This is all politics. No one among the Democrat senators believes a word of Ford’s testimony. Not one of them would say a word were Kavanaugh a Democrat nominee. It is all show for the morons who vote for them. The disdain the Democrats have for their own voters is gigantic. They see them in the same way as I do: as low information, dumb beyond belief fools without a shred of common sense. They can see perfectly well that all of this has no other purpose but to make it harder for a government from the other party to govern. They want to pack the court with judges who will vote to do those things that cannot be done via a democratic legislative process. They understand perfectly well that they are trivialising accusations of rape. They comprehend without a shred of doubt that they are making the United States less governable. They can see without any hesitation that Ford is a stooge that has been put forward because the saps in their electorates across America eat all this up and hunger for more. They therefore do it because they enjoy the power this provides to them. They do it because they believe it will attract more voters than it will repel. They are making it as plain as day that they think their own constituency is ignorant and repulsive. But this is their line of work and if they are to keep their jobs, this is what they must do.

The Republicans think exactly the same – that Democrat voters are fools. And they know just as well as the Democrats that there is a proportion of the voting population that will make their vote depend on this and this alone. They understand rape is a terrible event in anyone’s life and would not nominate anyone if there were any genuine evidence that any of the accusations made against Kavanaugh are true. Aside from those members of their Senate caucus who prevented a majority vote from succeeding, they would have nevertheless taken the risk of the bad press that will follow when and if they confirm Kavanaugh’s nomination. They have a razor-thin majority in the Senate that can only survive a near-unanimous vote from their side of the aisle. They are counting on there being enough common sense and sound judgment left with the voting public to be able to succeed and retain the House and Senate majorities in November. They see the Democrat tactics for what they are.

As for the notion of sexual assault, to really believe that is the issue makes you so stupid that it is painful to see what nitwits politicians have to deal with routinely. Nowhere else have I found it so well put as here in a post at Powerline with the title, #COUNTMEOUT!.

The post then continues in the same vein which I would say really must be read, but if you are reading it here, would mean it will be read mostly by those who do not need to and never by those who need to. But read it anyway. 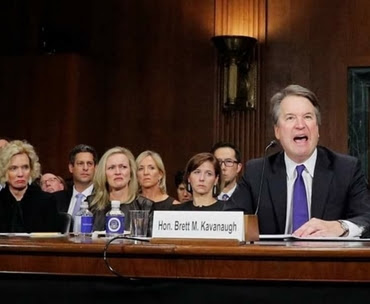