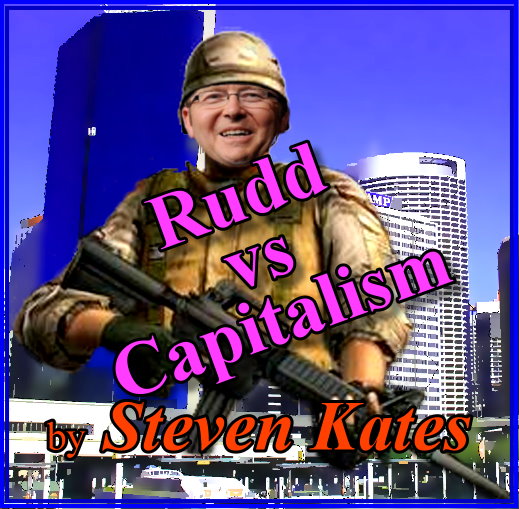 I sometimes think that our economic problems are the least of the troubles we face but they are pretty bad and getting worse. Labor, having wrecked the place, is getting out just in time. No doubt they will have much to criticise from the Opposition benches as the efforts to repair what they have ruined gets into full swing.

The uselessness of the media is never better highlighted than their light touch on leftist governments which are allowed to go well beyond reasonable bounds because criticisms of anyone with a socialist halo is verboten. So what we have is an economy crashing in many directions and from a multitude of directions. Prudence is a great virtue in economic management, a characteristic those with a socialist time perspective never seem to have.

This “QE dries up” from a front page story in the AFR which is part of a headline that also reads “Shares, $A plunge”. This is followed inside with “China credit data fuels doom-mongers’ fears”. We are becoming collectively poorer by the day and our ability to trade our way out of the debt and deficits being left behind is becoming a more gigantic task with each fresh decision by the party with the Parliamentary majority.

Meanwhile, those guys in the media, and that includes the likes of Laura Tingle and etc, you don’t do either the Labor Party or the rest of us any good by not having raked them over the coals for being the Beyond Stupid Party it has become. Unless you personally agree with the range of policies that are ruining us, then it is not just your duty as journalists but your duty as friends to these socialist cretins that you let them understand the nature of the dangers they run. And if you couldn’t see it coming yourselves, then what good are your opinions anyway?

Meanwhile Kevin Rudd is the apparent answer if the only aim is to rid ourselves of Julia Gillard. But as a reminder of how we would be trading one disaster for another, let me dredge up an article I wrote for Quadrant in April 2009 just after Kevin wrote his attack in The Monthly on what he chose to call neo-liberalism. It is titled, “Reflections of a Neo-Liberal“. The PM referred to is of course Kevin Rudd but I suspect it would just as easily apply to his successor. But if you wish to be reminded of the true nature of our once and future PM, these ought to be all the warning you need.

So to the Prime Minister’s article. Here we find a polemic on the evils of the capitalist system as it exists today. It is an imaginary system, bearing little reality to the world in which we actually live.

The article is 7700 words long. No précis can give any more than a taste of how extreme the language is and how misconceived the thoughts. He has invented a villain, the neo-liberal, whose demise is now the mission the Prime Minister intends to hasten. The Prime Minister apparently believes that those on the other side of the political fence, the neo-liberals of his imagination, “fundamentally despise” the state and its role. He apparently believes that in the view of such neo-liberals, “government activity should be … ultimately replaced, by market forces”. He takes it as read that these neo-liberals have “sought, wherever possible, to dismantle all aspects of the social-democratic state”.

We only elect these people so that they can raid the cookie jar. Well, the cookie jar is now well and truly empty and then some. Back to the people who will hopefully fill it up again although if the only aim is to raid it once again some time in the future it is hard to really see the point.