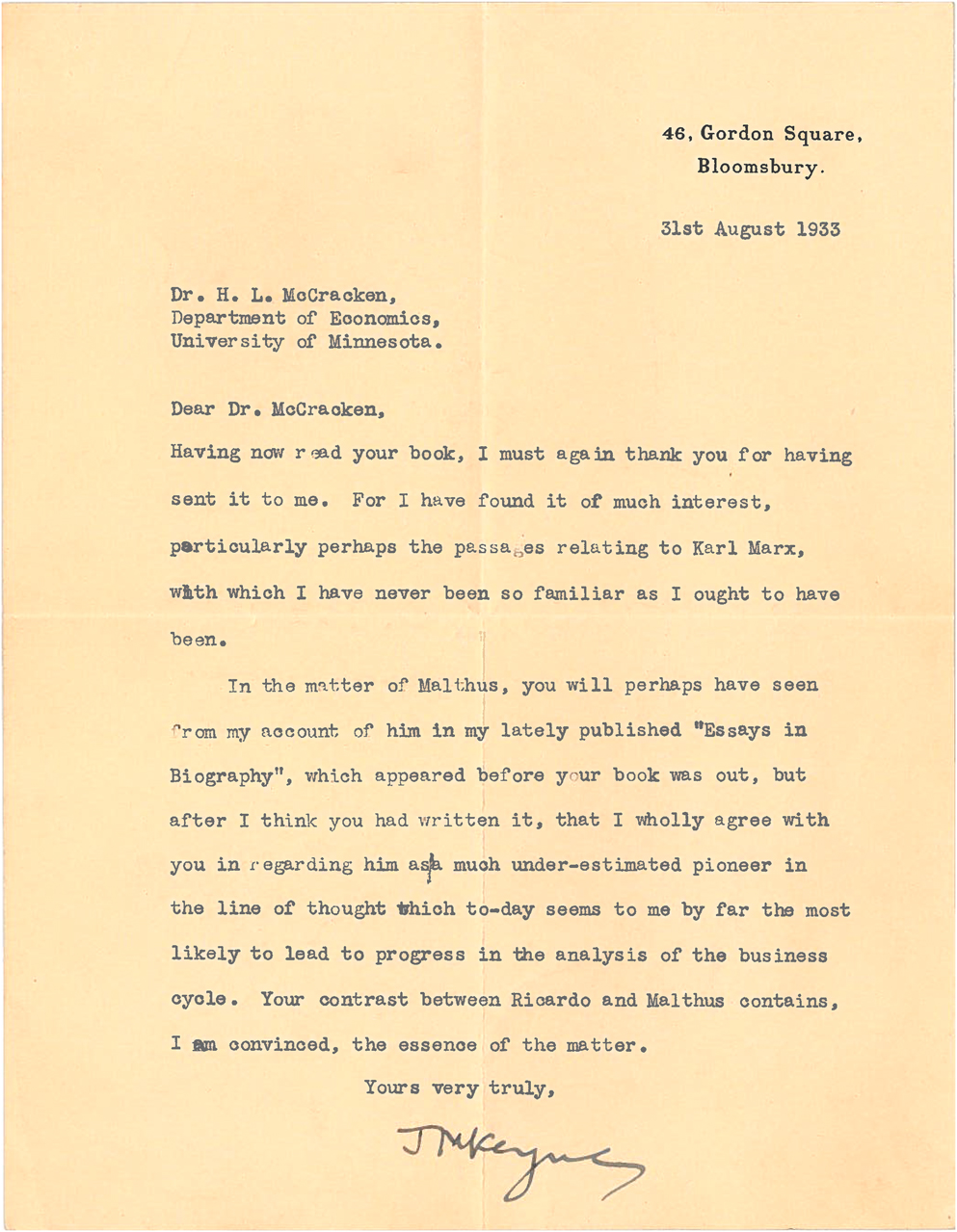 The letter you see I uncovered in 2008 in the Harlan Linneus McCracken Archive at Louisiana State University, which has now been published in the March 2019 issue of the Journal of the History of Economic Thought. It has already been published by me, but only in black and white. Here we see the letter as it actually is. If you would like to read more fully of the letter’s significance, you can go to:

Kates, Steven. 2008. “A Letter from Keynes to Harlan McCracken Dated 31st August 1933: Why the Standard Story on the Origins of the General Theory Needs to Be Rewritten.” History of Economics Review 47: 20–38.

The letter would be momentous were it not for the fact that it reveals that Keynes with certainty was reading other sources than those he had previously owned up to in writing The General Theory which he commenced writing in 1932 and which was finally published in 1936. The letter substantiates virtually beyond argument – there is always an argument – that Keynes took up the notion of demand deficiency because he had been reading Malthus at the time. Malthus had been the single most important economist to have argued for the importance of demand deficiency as a cause of recession and unemployment during the nineteenth century. Virtually every other economist at the time and through to 1936 thought Malthus was completely wrong. It was unanimously agreed among mainstream economists that the notion of demand deficiency was totally false.

The article the letter is attached to, and now published in the Journal of the History of Economic Thought, was written to demonstrates that “Say’s” Law not was invented by J.B. Say. No understanding of the classical meaning of Say’s Law can be found other than by going through the literature that followed the publication of Malthus’s Principles in 1820, not by reading Say’s Treatise, whose first edition was published in 1803. Moreover, “Say’s Law” was the name applied to this concept for the first time by Fred Taylor in the twentieth century. It was not a classical term. Keynes took the phrase “Say’s Law” from Taylor or from one of Taylor’s contemporaries. I am near enough the only person from whom this can be found out. Virtually no one else will even repeat it, and certainly no one is capable of refuting it since the term never shows up anywhere until it was coined by Taylor. Beyond that, no one ever said “supply creates its own demand” in relation to Say’s Law until it was said by McCracken.

You would not think there would be such a cover-up in something as esoteric as the History of Economic Thought, but the implications are explosive, the more so to the extent that others might begin to appreciate there is more in pre-Keynesian economic theory than anyone since 1936 has given it credit for.